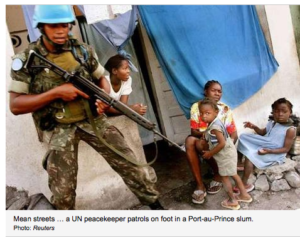 Are the countries that normally foot the U.N.’s bills drawing a line in Haiti?

There are some unsettling signs to consider, weeks before the start of an international donors’ conference on March 31 that is reportedly expected to face requests for more than $11.5 billion to rebuild the shattered island.

Even before the mammoth earthquake that virtually destroyed the capital of Port au Prince in January, the spiraling cost of United Nations peacekeeping on the ravaged island was apparently outstripping the ability — or willingness — of rich Western nations to support it.

Since then, the financial strains rippling out from Haiti’s latest calamity have become even more severe.

A $1.4 billion, worldwide, post-quake aid appeal for Haiti, orchestrated by the U.N.’s Office for the Coordination of Humanitarian Affairs, had by March 15 drawn only $701 million — or 48 percent of the total, with the U.S. and the mostly American private sector far ahead of any other country in giving.

Click here to see the appeal results by country.

That emergency aid total does not include the huge and still rising outlay for peacekeeping by the United Nations Stabilization Mission in Haiti (MINUSTAH), which in the wake of the earthquake is growing faster than the ability of U.N. budgeters to estimate it.

Indeed, U.N. peacekeeping in Haiti, with a combined military, police and civilian force of about 13,000, is expected to soak up nearly as much money in its next budget year as the world has so far given in emergency aid to the island’s entire population of 9.5 million or so.

According to a new U.N. budget report on global peacekeeping operations, the world organization at the end of 2009 was six months behind in paying countries that had supplied some 7,000 troops and 2,000 policemen who were keeping order in Haiti before the cataclysm. The report says the shortfall was “primarily” caused by the slow rate at which donor countries were paying their share of the peacekeeping bills.

A U.S. diplomatic spokesman told Fox News that the U.S. had paid its share of peacekeeping for the 12 months ending June 30, 2010, “in full.”

The countries contributing troops range from Brazil and Argentina to India and Nepal, with an even more diverse roster contributing police.

The U.S. is the largest contributor to U.N. peacekeeping, paying 27 percent of the worldwide tab — more than double the rate of the next-highest contributor, Japan — which the U.N. estimated to reach $7.9 billion for the 12 months ending on June 30, 2010. The five members of the U.N. Security Council — the U.S., Britain, France, Russia and China — pay nearly half of the total (China pays just under 4 percent), while 32 other, predominately Western countries pay nearly the same amount.

The remainder of the U.N.’s 192 members contribute 4.1 percent of the total. Oil exporting giant Saudi Arabia pays 0.5 percent and Kuwait 0.42 percent, while Brazil pays 0.32 percent and India 0.11 percent — or slightly less than Hungary.

The Haiti peacekeeping effort is not the only one where the U.N. was six months behind on payments, but it is by far the biggest. (Others include a $54 million operation in the Western Sahara, a small force in Cyprus and a $205 million peacekeeping effort in East Timor.)

According to the budget report, MINUSTAH was slated to cost $611 million for the 12 months ending next June 30, but the earthquake has made those numbers fiction.

In the new U.N. report, planners have apparently struggled with that issue for the upcoming financial year. According to the report, Haiti peacekeeping is budgeted for $700 million for the 2010-2011 period — a 14.4 percent increase over the previous 12-month period, and more than double the previous hikes in MINUSTAH budgets from previous years.

A brief footnote emphasizes, however that the $700 million figure is “for information only” — translation: a much rougher guess than usual — since it was compiled only weeks after the earthquake brought chaos to the island. A total of 101 U.N. staffers, troops and police died in the disaster.

Click here to see the new budget for MINUSTAH and other U.N. peacekeeping operations.

In the wake of the calamity, the U.N. Security Council had authorized boosting the number of peacekeeping troops on the island to more than 8,900, and upping the police force to more than 3,700 — roughly a 40 percent increase in staffing. Some of those additional forces are already on the ground. (There was no increase mandated for the U.N.’s civilian staff in Haiti of roughly 2,000.)

How much those additional forces will further skew the projected cost of MINUSTAH — and increase the strains on Haiti’s supporters — is still unknown.