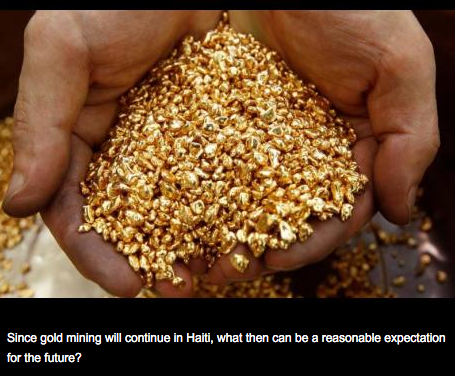 Haiti is back in the news with popular revolts against political corruption. Ordinary Haitians are being frustrated every step of the way as they strive to enjoy a better quality of life as is their right.

The discovery of a huge US$20 billion gold reserve in Haiti is no panacea since gold mining has always been surrounded by intrigue, skullduggery, and, perhaps, international plunder and piracy.

Americans, Canadians, and politically well-connected present and past Haitian political leaders stand to reap vast profits from the apparent plundering of Haitian gold.

Haitian workers, meanwhile, are paid a measly US$6.25 a day for working in the muddy, gold-mining pits.

The historical evolution of Haitian society has been one in which the ordinary people have been exploited, brutalised, and oppressed – starting from the turn of the 19th century up until 1990, with Haiti’s very long history of American political and military interventions, dictatorship, militarism, cronyism, and official corruption.

There was a period from 1957 to 1971 when Haiti was ruled by François ‘Papa Doc’ Duvalier. Political opponents were suppressed by the infamous paramilitary group, the Ton-Ton Macoutes.

The political economic climate of these repressive regimes was aimed at maintaining “business-friendly environment”.

Popular revolt, like we are seeing in Haiti today, led to the collapse of the oppressive Duvalier rule.

Following this, in 1990, a progressive Catholic priest, President Jean Bertrand Aristide, was elected, winning 67 per cent of the popular vote.

President Aristide attempted many populist reforms, then in September 1991, a military coup d’état removed him from office.

He was again re-elected president in 2001. Then in 2004, right-wing paramilitaries, aided and abetted by foreigners, violently removed him from power.

President Aristide was put on a plane and dumped in a remote area of Africa.

Haitians were once again going through the back and forth of corrupt governments under which politicians, the ruling elites, and foreigners got wealth while the ordinary people suffered.

Then came the 2010 earthquake and the entry of the Clinton Foundation, ostensibly to help with reconstruction.

Over 200,000 people were killed and a further 300,000 reportedly injured. Many poor neighbourhoods were devastated.

The Clinton Foundation and the Red Cross raised an estimated US$1 billion, but no one can say what happened to this money.

As to the work of the Clinton Foundation, well, what about it?

Tony Rodham is the brother of Senator Hilary Clinton. It was his company, VCS Mining, that according to the Daily Mail, was given a ‘very lucrative gold-­mining contract’.

VCS Mining will pay one of the lowest royalty rates in the world. The Haitian government charged a rate of 2.5 per cent over a 25-year period, with renewal. In comparison, Peru charges a royalty rate of 12 per cent, while Ecuador charges between five and eight per cent for its royalty rate of gold mining.

VCS Mining is a Delaware-­registered company with a “foreign qualification service” designation, allowing it to work overseas. Its board members include former Haitian Prime Minister Jean-Max Bellerive along with former Clinton and Obama administration officials.

“This is a complicated story fraught with intricate detail and begins with the fraudulent installation of a crooked Haitian president, a Korean trade deal, an industrial park facilitated by the Clinton Foundation,”and other unsavory elements, Georgianne Nienaber reports.

Nienaber quoted leaked emails that showed how a USAID-funded power plant, instead of supplying Haitian homes with electric power, was used to supply electric power to VCS Mining operations.

“It would be scandal enough if Tony Rodham and VCS Mining benefited from a gold mine permit in Haiti, but the potential electrical power lines for that gold lead straight to one of the biggest lies to come out of Haitian ‘reconstruction’,”the report stated.

“Meanwhile, there are severe environmental risks associated with gold mining. These risks include the possibility of cyanide spills poisoning the water-supply system.

Since gold mining will continue in Haiti, what then can be a reasonable expectation for the future?

At present, half of Haiti’s US$1 billion budget comes from foreign aid. Despite this, it is unclear if future gold-mining royalty payments will be placed in a National development fund.

Many nations do this. If this was done, it would certainly help to set aside money to further develop the country and to help the Haitian poor people.

The Haitian government must:

– Set up an independent, transparent national development fund to put some returns from gold exploration and mining towards improving the Haitian people’s lives, while;

– Setting up and maintaining an effective, disaster-­management agency to help mitigate the possibility of a disaster.

Meanwhile, as Haitian gold continues to enrich a handful of people, the dislocated many, who sought refuge in America, are now being driven away by the Donald Trump administration.

In short, it is fine to say: ‘Haiti, give me your gold but not your weak and weary’. 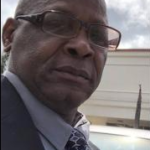