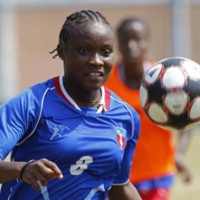 The Lady Grenadiers scored 4 goals leaving Suriname with love at the end of regulation. Cuba dominated their opponent as well with a 6 points and love for Aruba. The two top teams in Group A will compete next.

For over 2 years Haiti’s Football Development Prorgamme has been a source of hope and strength for its people – and last night the population experienced an explosion of hope and pride as its National Women’s team walked away with a 4-0 victory over Suriname.

At the start of play Lexieux Ronald’s team dominated the field , they displayed form and skill far superior to their continental counterparts.

Looking at the one-sided game, the Haitian team tickled the crowd with their fancy footwork , they were for that 90 minutes they embodied the spirit of triumph.

Despite creating a number of chances in the 1st half Haiti was only able to materialize a goal -one minute of additional time in the first half. In the 46th minute Nadia Valentin was able to find the back of the net.

The Surinamese team came out in the second half with a renewed spirit despite two substitutions and a change in their formation, the team was unable to out play the Haitian defence.

However Haiti’s superior skills once again proved too much for the Surinam girls as Haiti’s Yolande Merone penetrated a wall of Surinamese defenders to place a brilliant right footer in the back of net in the 52nd minute.

Despite a number of valiant attempts the Surinamese were never able to make an impact on the score line.

But the Haitians were not finished with their domination of the playing field. In the 85th minute Nadia Valentin was able to score her second goal before the 90th minute.

Action in Group A will continue on Friday when the table leaders, Haiti and Cuba face-off while the home team, Aruba, takes on fellow Dutch speakers, Suriname.