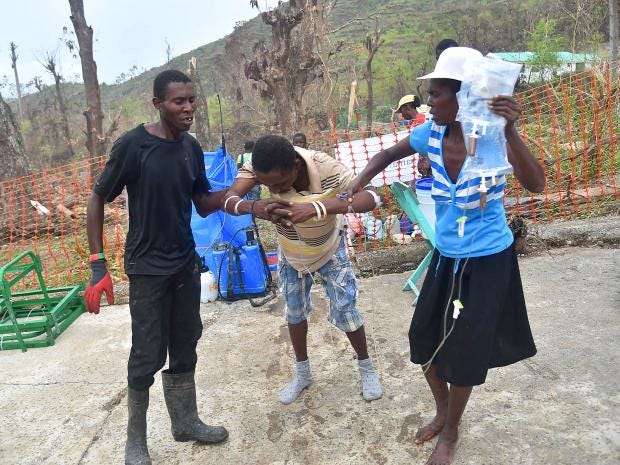 The world is falling grievously short in its response to the “absolutely grotesque” devastation inflicted on southwestern Haiti by Hurricane Matthew which in turn is threatening to unleash a new wave of cholera cases in the country, a top UN official is warning.

Dr Nabarro, a British medical expert who is among six candidates to replace Margaret Chan as the next director-general of the World Health Organisation (WHO), was picked by Mr Ki-Moon in August to lead a new campaign to address Haiti’s ongoing cholera crisis, an assignment that has become significantly more urgent since the country took a direct hit from Matthew on 4 October.

In the meantime, there is growing evidence that the destruction caused by the hurricane in the Grand-Anse, Sud and Nippes provinces at the hard-to-reach tip of the long peninsula that is southwestern Haiti is already helping to exacerbate the cholera outbreak, which since 2010 has infected 800,000 Haitians and killed more than 9,000 people.

Dr Nabarro, whose career has also included dealing with Ebola and other health emergencies in the wake of earthquakes, floods and war, had just returned to New York from a visit to the affected areas in Haiti when he described scenes that he said were unlike any he had seen before.

“The hurricane goes like a great big sanding machine across here,” he explained, showing a map of the peninsula. “It is absolutely grotesque when you go out there.”

“I have been to horrid places an awful lot, but this was exceedingly distressing. The degree to which people really have lost everything, because of the great big sanding machine that just went over everything and scoured the surface of the ground. That is something that is new to me,” he said, describing it as, “at the extreme end of any spectrum that I have ever applied”.

Previously concentrated mostly in the central region of Haiti, cholera now threatens to take hold in the southwest for multiple reasons. It is a water-borne disease and the inundation caused by Matthew – about three feet of rain fell in a day – caused a sudden rise in the water table which in turn flooded sceptic tanks. Sanitary systems that did exist were largely destroyed. There is also the risk that Haitians going to the area to help might be bringing the disease in with them.

“We have certainly got quite a lot of cases reported since the hurricane came along,” Dr Nabarro indicated, while adding that a lack of laboratory testing capacity and the fact that some areas still have not been accessed means that accurately tallying new cases remains difficult.

“We can’t say exactly whether we have got great big spike or a little spike,” he said, but noted that there have been between 1,000 and 2,000 suspected new cases reported to his teams in the last two weeks alone. 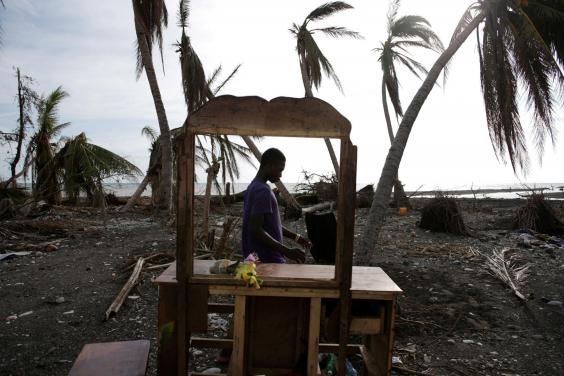 The aftermath of Hurricane Matthew in Damassins, Haiti (Reuters)

“To have have had between 1,000 and 2,000 cases predominantly in the southwest in the past ten days plus does not necessarily mean that we have a big increase,” Dr Nabarro says with evident caution. “But my hunch is that we have more cases than usual at the moment.” He said that news from the WHO that one million cholera vaccines have been shipped into Haiti this week alone is one bright spot.

If the UN is struggling to raise money for its cholera programme in particular, it may be because it has now long been assumed by the medical community that it was Nepalese peacekeepers deployed by the UN itself after Haiti’s 2010 earthquake who introduced the disease to the impoverished nation in the first place.

The continuing refusal of the UN directly to admit responsibility for the outbreak was roundly condemned as, “morally unconscionable, legally indefensible and politically self-defeating,” in a final report released this week by Philip Alston, a New York law professor, who was appointed this year as a special UN rapporteur on poverty and human rights.

The failure to accept legal liability is “a huge disservice to the UN” and a “terrible precedent for the future,” Mr Alston wrote in a section of his report dedicated to Haiti and the cholera epidemic.

When speaking to The Independent, Dr Nabarro was careful to avoid using any language that could be construed as admitting any guilt on the part of the UN, even as the world body took the decision in August to tackle the epidemic head-on under his supervision.

“It was never guilt, it was something a bit different,” he said. “The emotion was the following: the cholera is associated with the UN, people are suffering, we must help them because they are suffering. It’s more a direct recognition that there was pain and something had to be done about it.”

Other factors behind the world’s sluggish response to Haiti’s latest plight, he offered, might include the fact that cash for humanitarian emergencies is simply running short, thanks in part to the drain on resources created by Aleppo and Syria more broadly, and also to a sense in many capitals that they have poured money into Haiti before and they are disinclined to do so again.

But that, he argued, is a poor and cruel line of reasoning. “If that’s the case, it is totally unfair because it not Haiti’s fault getting hit by this hurricane,” he asserted.