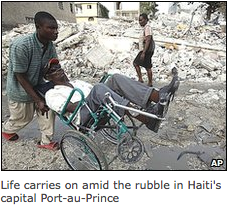 Haiti will need $11.5bn (£7.55bn) to rebuild after the devastating earthquake in January, the country’s government estimates.

The amount is a rough estimate of money needed for a complete overhaul of the impoverished country, officials say.

The plan, co-authored by international aid agencies, will be put to donors at a conference on Haiti later this month.

More than 220,000 people were killed in the quake, which is thought to have caused around $8bn worth of damage.

“This is a process. This is not a final document”, Haiti’s Tourism Minister Patrick Delatour was quoted as saying by the AFP news agency.

Estimates for the total reconstruction could be as high as $14bn, he added.

The reconstruction plan, known as the Preliminary Damage and Needs Assessment (PDNA) will be discussed at a major conference on Haiti in New York on 31 March.

The plan emphasizes that the main short-term priority is to prepare those left homeless by the quake for April’s heavy rains, and for the June hurricane season.

Around 218,000 quake survivors are living in temporary camps in the capital city of Port-au-Prince where there is a high risk of flooding and landslides.