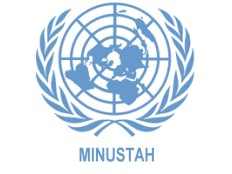 HaitiLibre:The second round in its entirety, has represented a definite improvement compared to the first round. The CEP was delighted and observers as well. Some shortcomings, relating in particular to the delay in the delivery of materials in some voting centers of the West Department and unrest in some areas have been observed. In a program on Minustah FM, Bouah Mathieu Bile, the Chief of the Electoral Assistance Division and the Chief of the Electoral Unit of the UNPol have responded to the listeners questions, relating, inter alia, to the responsibility or not of the Minsutah in these shortcomings observed during the election day.

As highlighted Bouah Mathieu Bile, these ballots come from a “a depot in which had been stored, some materials of 2009, to be used in the training of the staff of the polling stations” and also states that all materials, old and new, has been ordered at the same supplier by the United Nations Development Programme (UNDP), the purchasing manager. Once arrived, it has been approved by the Provisional Electoral Council (CEP), together with UNDP, to ensure compliance”. “The sampling was done”, according Bouah Mathieu Bile.

“We had asked to the responsible of the depot to ensure that the kits of 2009 be segregated to prevent them from mixing with the new. Presumably, this is at the time of loading that the error occurred”. And adds that “investigations are underway to better understand what really happened, and, timely clarifications will be made in the transparency and credibility”.

For Bouah Mathieu Bile, the error was discovered barely, around 5-6 am, the polling day. After observation, the arrangements were immediately taken and the peacekeepers of the Minsutah have effectively replaced the missing items during the morning. “The most important, in fact, is that the vote has been able to continue normally, despite this delay” argued the Chief of the Electoral Assistance Division. In any electoral process, also explains Bouah Mathieu Bile “four key elements are sometimes subject to problems, namely logistics, training and the behavior of the electoral agents, the awareness and civic education as well as the securisation of the process”. The opportunity to recall that “the presence and the intervention of the Minsutah are not only to the request of the Haitian authorities, but also in the respect of its sovereignty.”

Securisation : from the securisation, to the reaction :
Arambourg Daniel, in his quality of Chief of operations of the UNPol and of the electoral unit of the Police of the United Nations (UNPol), recalled that in the the context of the securisation of the electoral process, a preliminary work was carried out between the Police Nationale d’Haiti (PNH) and the Forces of of the Minsutah UNPol and with the Departmental Electoral Offices (BED) and the Communal Electoral Offices (BEC). “It is important indeed, to estimate the sensitivity of each voting center. From this work is derived a joint integrated security plan, followed by a judicious deployment of staff. Alongside the PNH were deployed 1.350 UNPol members, 2.950 officers of the Formed Police Unit (FPU), 8,500 military and 4.200 electoral security agents (ASE). A week before, this are some 23.000 agents who had the task of ensuring the security of the process. Compared to the first round of elections, some 430 FPU and 80 UNPol were added to the security apparatus, as well as 40 additional vehicles.”

In terms of reaction to contain an incident that arises the Chief of operations of the UNPol admitted that there were “several incidents between gunmen and the security forces and we made ​​arrests, seized weapons and handed the individuals to the Haitian justice” and adds “We have be able to control the situation in the all the voting centers that have experienced incidents. Sometimes we were supported by the population.”

To the question to know if the armed men had infiltrated the voting centers under the impassive gaze of the forces of the Minsutah, the Chief of the UNPol operations highlights “that it may happen that in some places, for one reason or another, the Minsutah officers were not present or have been somewhat distant from their colleagues of the PNH when the incidents occurred in the the voting centers”. But in any case, he says, “the individuals are passed under the eyes of the forces present, because, whether it’s the UNPol, the FPU or peacekeepers, rules of engagement of the United Nations are very clear on the subject”. However, he pointed out “The real question is why armed men can afford to disrupt an election”.

In General, concludes Daniel Arambourg, “the role of the Police of the United Nations is a role of support to the PNH and of technical adviser. It is the PNH who has the executive mandate. In regard to elections, we have naturally transposed our role of adviser and transferred our resources to the benefit of our colleagues of the PNH”.

In fact, Preval ordered his CEP representatives to fudge on paperwork involved in what is called a Verbal Process, in which someone, not on the voters’ lists, can fill out forms on the day of the election. Several signatures are required and Preval instructed his CEP people to leave off at least one signature. Now they can invalidate these specific votes – all for Martelly.

In Haiti, many make a 1 that looks something like a 7, without the European cross-bar. Now Preval has ordered these votes to be given to someone else.

In a land of the illiterate, and fear of authority, this is grossly unfair. But then, again, this is Haiti and there is little fairness, when dealing with Haiti’s vast majority.