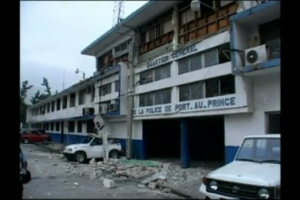 NEW YORK (CBS/AP) Amidst the horror and devastation of the massive 7.0 earthquake that has rocked Haiti, almost all of the 4,000 inmates in the capital’s main prison have escaped.

“They obviously took advantage of this disaster,” Marcal Izard, a spokesman for the International Red Cross, said.

CNN’s Anderson Cooper visited the jail in Port-au-Prince and filed a report Friday. “We heard the prison was destroyed. We didn’t realize we’d find the door wide open,” he said.

Cooper reported seeing four dead bodies and dried blood on the floor. He also found bloody handprints and a rope that hung 30-40 feet from the guard wall to the street outside.

UN officials believe the prisoners rioted after the quake, overwhelmed the guards and escaped, Cooper reported.

“When you have criminals, bandits, assassins who terrorize the population – and we have all those types here – it’s a big problem for the country,” the prison’s warden Alexandre Jean Herisse, told Cooper.