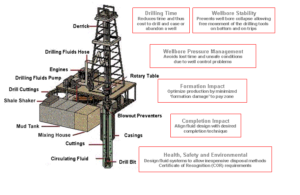 The earthquake in Haiti this month may have left clues to petroleum reservoirs that could aid economic recovery in the Western Hemisphere’s poorest nation, a geologist said.

The Jan. 12 earthquake was on a fault line that passes near potential gas reserves, said Stephen Pierce, a geologist who worked in the region for 30 years for companies that included including he former Mobil Corp. The quake may have cracked rock formations along the fault, allowing gas or oil to temporarily seep toward the surface, he said Monday in a telephone interview.

“A geologist, callous as it may seem, tracing that fault zone from Port-au-Prince to the border looking for gas and oil seeps, may find a structure that hasn’t been drilled,” said Pierce, exploration manager at Zion Oil & Gas Inc., a Dallas-based company that’s drilling in Israel. “A discovery could significantly improve the country’s economy and stimulate further exploration.”

“Haiti, from the standpoint of oil and gas exploration, is a lot less developed than the Dominican Republic,” Pierce said. “One could do a lot more work there.”

“One of the main reasons for the dearth of information on reserves in Haiti is that the Dominican Republic has numerous surface-hydrocarbon seeps while Haiti had very, very few,” he said.

Abraham Lincoln’s consul to the Dominican Republic reported oil seeps there in 1862. Neither nation produces oil or gas. As much as 1 trillion cubic feet of gas may be trapped in a border formation near the earthquake fault, Pierce said.

Pierce hasn’t worked in Hispaniola since joining Zion in February 2005. He said he’s unaware of any petroleum geologists conducting fieldwork in Haiti. There has been exploration of Ocoa Bay, the largest potential oil deposit in the Dominican Republic, he said.