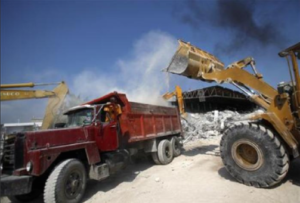 PLAYA DEL CARMEN, Mexico (Reuters) – The death toll from last month’s devastating earthquake in Haiti could jump to 300,000 people, including the bodies buried under collapsed buildings in the capital, Haitian President Rene Preval said on Sunday.

“You have seen the images you are familiar with the pictures. More than 200,000 bodies were collected on the streets without counting those that are still under the rubble,” Preval told a meeting of Latin American and Caribbean leaders in Mexico. “We might reach 300,000 people.”
That would make Haiti’s earthquake one of the most lethal natural disasters in modern history, more than the 200,000 people killed in the Indian Ocean tsunami in 2004.

The cost of rebuilding the impoverished country after the 7.0-magnitude quake could be as high as $14 billion, according to the Inter-American Development Bank.
Preval’s plea for aid will be at the top of the agenda at the regional summit being held near the Mexican resort town of Playa del Carmen.

With 250,000 houses destroyed and 1.5 million people living in tent camps made with bed sheets and plastic scraps in nearly every open space in the collapsed capital of Port-au-Prince, Preval said the most urgent need is for emergency shelter.

Aid workers worry that squalid conditions in the camps, many which have no latrines or source of clean water, could lead to disease outbreaks when the rainy season begins in earnest in March.

“The first rainy days that have started falling in Port-au-Prince have made it impossible to enjoy a dignified life and this is the reason for the request for shelters,” Preval said.
Looking ahead to a meeting with international donors to determine the overall shape of rebuilding plans, Preval suggested Haiti should decentralize away from Port-au-Prince, which suffered the heaviest damages.

“We will not try to reconstruct but rather to refound the country, where we don’t concentrate ourselves in one capital,” Preval said. He encouraged Latin American countries to step up investments in industry to help Haiti free itself from dependence on international aid.