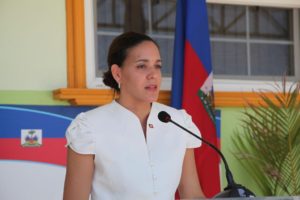 PORT-AU-PRINCE, Haiti –  Haiti’s communications minister has resigned from her post, becoming the second Cabinet member to step down in as many days, media outlets reported Thursday.

Privately owned Radio Tele-Kiskeya and Radio Tele-Metropole said that Communications Minister Regine Godefroy had quit, citing an unnamed source. Neither outlet said why she was leaving.

Godefroy was named to the communications job in January, part of a second shake up by Prime Minister Laurent Lamothe since he became Haiti’s No. 2 official in May. She previously had been director of the country’s postal service.

There was no immediate response from the government about the latest reported resignation. Godefroy could not be immediately located for comment on Thursday.

News of Godefroy’s resignation came one day after Marie Carmelle Jean-Marie resigned as Haiti’s finance minister. Jean-Marie didn’t speak to the press but several radio stations reported that she left her job because she didn’t receive support from her colleagues as she tried to bring transparency and other reforms to the office.

Lamothe has acknowledged Jean-Marie’s resignation, but his office declined to answer questions from The Associated Press.

The back-to-back departures come amid growing allegations of various types of government corruption. Lamothe’s office has responded by issuing statements that his administration will not tolerate graft.