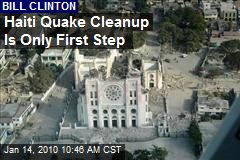 PORT-AU-PRINCE, Haiti – The international committee charged with rebuilding Haiti after a devastating earthquake announced plans on Monday for reconstruction projects aimed at helping some 300,000 families.

The international community pledged several billion dollars in aid to Haiti after the catastrophic earthquake in January 2010, which flattened the capital Port-Au-Prince and killed more than 220,000 people.

But little has been rebuilt as donors have held off on implementing projects, in part because of the murky political outlook following disputed elections last year.

The Red Cross, which has collected more than a billion dollars for Haiti relief since the earthquake, meanwhile said that it would provide some 30,000 transitional homes, including by repairing some 10,000 houses in the capital.

And Spain and Japan both joined the IHRC, with contributions of $30 million each to be spent on reconstruction.