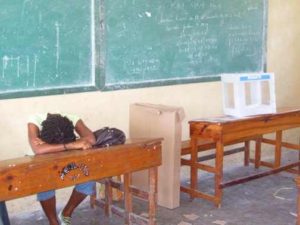 PORT-AU-PRINCE, Haiti (AP) — Haitians prepared for armed clashes and more days of flaming barricades as rival candidates called on supporters to take to streets and tip the balance in a sharply disputed presidential election leading.

Gunfire ripped through post-earthquake shanties near the ruins of the national palace on Thursday afternoon, killing at least one man and injuring several more, witnesses said. Third-place candidate and carnival singer Michel “Sweet Micky” Martelly blamed the attack on supporters of government-backed candidate Jude Celestin, who is edging him out by less than 1 percentage point for a spot in a January run-off.

The provisional electoral council announced a seeming compromise on Thursday afternoon with a re-count of tally sheets at which international observers and the three leading candidates — Celestin, Martelly and first-place vote-getter and former first lady Mirlande Manigat — could attend.

But the situation appeared to continue worsening.

The United States reissued a travel warning recommending all U.S. citizens reconsider nonessential trips to Haiti — citing high crime, the cholera outbreak and social unrest. Canada closed its embassy until further notice because of the post-electoral violence. Flights were canceled in and out of the capital’s international airport.

The Nov. 28 election hobbled by disorganization, voter intimidation and fraud alleged by every active candidate in the race. Less than a quarter of eligible voters are said to have cast valid ballots.

Martelly was long popular as a carnival leader and singer of kompa, a jazzy Haitian dance music he blended with R&B and satiric lyrics. His political popularity took off in the weeks before the vote and seems to have surged since it appeared he had been narrowly disqualified from the race.

Pro-Martelly riots began Tuesday night immediately following the announcement of results that ostensibly eliminated him from the second-round runoff. The demonstrations were rowdy but violence was mostly directed at property and symbols of opposing candidates. Rocks were thrown at well-armored U.N. soldiers who have responded with a constant barrage of exploding tear gas canisters and rubber bullets.

Port-au-Prince and other cities including Les Cayes and Cap-Haitien have been paralyzed by barricades, which are sharply criticized by aid workers impeded from treating an ongoing cholera epidemic that has killed more than 2,000 people. Casualty figures are sketchy but radio reports say that several people have been killed.

Large-scale demonstrations were also reported in the volatile northwestern city of Gonaives. Former rebel leader Guy Philippe took to the airways to further fan the flames, accusing all candidates of having cheated in the election.

Celestin made a rare television appearance on Thursday night to call for the mobilization of his supporters and an end to the riots and destruction of property.

“I guarantee you, your vote will not be trampled on,” he said in an edited, taped appearance in which he often seemed to be reading cue cards. “We have already taken measures to ensure the (electoral council) will respect our votes.”

His campaign chief, Sen. Joseph Lambert, told Haitian media earlier that supporters should “clean up” the streets of Port-au-Prince — a reference to the traffic-halting barricades set up mostly by Martelly backers.

“He is talking about people in possession of weapons who are ready to fight. We do not have any weapons on our side. The fight we are having is a legal fight,” said Martelly adviser Daniel Supplice.

“Unfortunately there probably will be clashes in some areas,” he added.

Violence is already taking its toll. Victims of the Champ de Mars shooting were rushed to the overburdened and underfunded general hospital, where medical workers struggled to care for some and redirected others to a private hospital several barricades away.

“They were already on the radio saying he was shot and I didn’t believe it until I came to find out,” said book vendor Jacqueline Sanon, whose brother, Fitzner, took a bullet to the upper body. “I don’t know if he is alive … we are just waiting for an answer.”

On Friday, officials will sort through the legal challenges and continue reviewing the vote count. Council president Gaillot Dorsainvil said on radio that the re-count was necessary, given the evident dissatisfaction of many voters, protests and violence that followed the publication of preliminary results.”

The U.S. Embassy has said the preliminary results appeared to conflict with reports from observers who monitored the count.

Protests are fueled by widespread disaffection with the government institutions and vitriol at outgoing President Rene Preval, whose Unity party picked Celestin, little-known head of the state-run construction company, as its candidate.

His own election was also decided through riots in 2006, which forced the cancellation of a second-round vote through a MINUSTAH-imposed unconstitutional compromise that gave him more than 50 percent of the vote.The election was mandated by Haiti’s constitution. But there were many human-rights advocates who said it should not be held so soon after the earthquake, in the midst of a raging cholera epidemic that has claimed thousands of lives.

Everyone seems to miss a simple, yet important fact.

A series of fraudulent polls, created by Preval intimate, President of the Chamber of Commerce, Reginald Boulos. These 4 BRIDE polls showed Manigat, Baker, and Martelly with a popularity they did not, in fact possess. This was part of Preval’s plan to “Win by Losing.” If you look at the first polls, Celestin was way down the list. Preval had already purchased Mirlande Manigat for a couple of millions, plus an armored SUV and the promise INITE would back her in the second round.

The first round would have knocked Celestin out, showing the election was really free-and-fair.

With Baker and Manigat, in the run-off, Manigat would win: Preval would have “Won by Losing…”

Manigat became a problem and Preval shifted gears to see Celestin installed first round, no run-off.

But, people have forgotten the original purpose of the popularity polls and are still trying to apply them as REALITY when they are only a PERCEIVED REALITY.

The entire electoral process has been so badly tainted that any effort to save it resembles a physician trying to sew hamburger together.

By hanging onto the false popularity situation, created by Reginald Boulos, the real winner of the popularity – Jean-Henry Ceant – is left out. The BRIDE polls left him trailing the dog catcher.

And with this flawed concept, Preval still wins.

There is only one solution and that requires the cancellation of this fatally flawed election. Preval must step down and cease meddling with the electoral process. A new CEP must be created. (It would be useful for the 9 current members to face Justice for their crimes) A new election must be held.

As with any Haitian situation, there is usually money behind it. In this case, Regenald Boulos, through his car dealership, sold 100 vehicles to the Preval/Celestin team. Senator Rudi Boulos was given his passport back, ending the dual citizenship fiasco generated by Preval’s team.

So the Boulos family is happy while their 9,000,000 fellow citizens, without American citizenship, or visas, must face death by starvation, or via the cholera epidemic that rushes forward, unchallenged, as everyone fights over saving the life of a fatally injured election.

There must be a message on values here.