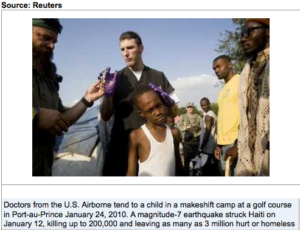 * Doctors worry unsanitary camps could spread disease * Infections also a growing concern 12 days after quake By Patricia Zengerle PORT-AU-PRINCE, Jan 24 (Reuters) – Outbreaks of infectious diseases feared after Haiti’s devastating earthquake have not yet materialized, but illness and infections are still a threat to survivors, health officials said on Sunday. The Jan. 12 quake killed up to 200,000 and left as many as 3 million hurt or homeless and pleading for medical aid, food and water in nightmarish conditions in the Western Hemisphere’s poorest country. Doctors worry that crowded, unsanitary conditions in hundreds of improvised refugee camps could spread illnesses such as typhoid and measles. They also fear for the thousands of people who have endured operations and now need to avoid infection as they recover. “We are talking about thousands of amputations and maybe half of the people who have been amputated have several limbs amputated,” said Dr Mirta Roses, director of the Pan American Health Organization, told a news conference at Haiti’s airport. Many others suffered head and eye damage. “It’s not only limbs,” she said. With fewer trauma surgeries as the search and rescue effort winds down, doctors will concentrate on caring for those recovering from injury. “The profile is changing and there are going to be different needs for post-operative care and follow-up,” Roses said. That task is complicated because the country’s remaining hospitals — 11 were destroyed and many others damaged — are at capacity, and because many of those who were treated no longer have homes where they can recover. “People don’t want to go out of the hospitals. And also their relatives don’t want to go out of the hospitals,” she said. Despite the thousands of emergency surgeries already performed, patients are still coming to clinics with fractured bones and skin wounds that have not been treated in the 12 days since the quake and which require specialized care that is not always available, Roses said. Health officials are also extremely wary of the start of the six-month hurricane season in June. Haiti has been hit extremely hard by storms in recent years, with hundreds of people killed in 2008. Experts had felt relieved when the 2009 hurricane season spared the impoverished nation as it recovery from 2008, Roses said. “We thought that we were extremely fortunate that we didn’t have any hurricanes,” Roses said. “Then, of course, we had the earthquake.” (Editing by Eric Beech and Eric Walsh)
——————————————————————————————————————–