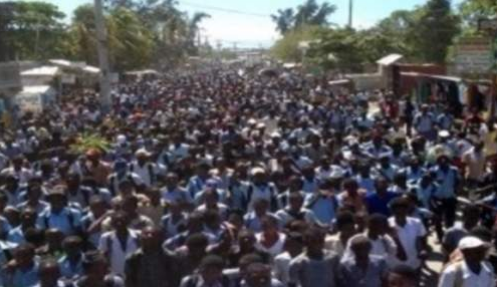 PORT AU PRINCE, Haiti (CMC) — The Haitian government says it is moving expeditiously to deal with the situation confronting teachers even as it said it was “deeply alarmed” by the demonstrations being staged by students “at the instigation of teachers and or trade unionists” in several cities in the French-speaking Caribbean country.

Both Lafontant and Cadet said the entire State apparatus has been mobilised to provide a speedy response to the problems of teacher regularisation in the classroom, without a letter of appointment, as well as the payment of arrears of wages.

Lafontant confirmed that he had given instructions that measures be taken as soon as possible to satisfy the teaching staff of public institutions.

But in a statement, the government said it was “deeply alarmed” by the demonstrations adding that while it recognises the right of any teacher to assert his claims, it finds it “unacceptable that at a time when the government is making enormous efforts to solve this problem, where teachers without title and quality find themselves in the classroom, students are used to block roads and the normal operation of public and non-public schools”.

The government said that it wanted to reaffirms its willingness to solve the problem of teachers without a letter of appointment in the classroom and the payment of salaries and warns all concerned to resume their courses immediately, in order to avoid sanctions, disciplinary and legal action.

But the students have continued their demonstrations resorting in some instances to violence. On Thursday, they threw stones and committed other acts of violence including damaging air-conditioners, the water tower, tearing up electrical wires.

They also attacked a court building forcing some lawyers to take off their suits to escape safely. Police remained at a distance to avoid confrontation with the students.

Police Commissioner Zamor John Joseph has warned students against any form of violence including the forcible closure of public offices or blocking the roads.