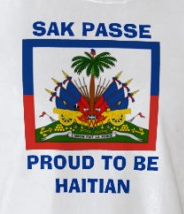 By Savannah Savary Figaro, and Roméo Halloun
Translated from French to English by Paul Sanon

Ayiti, Pearl of the islands, or Republic of Haiti are various names that are ascribed to this phenomenal corner of the globe. Seen by many as symbol of freedom, and emblem of hope, ironically, Haiti is also known for its poverty- a reward for having been the first free black republic. Despite everything, our founding fathers left us a great legacy and a humongous sense of pride.

On January 12, 2010, the earth went into a rage against the new model that was imposed on its sons and daughters. The Republic of Port-au-Prince was destroyed and 500000 of our brothers and sisters perished. This disaster of unparalleled proportion unmasked the frailty of our institutions and our government’s inexistence. Did all those people die in vain?

We hope that their blood will be a rallying cry for hope. A hope that will be transformed the reborn Haiti into a haven of peace and happiness. A haven that will be capable of feeding its own children; an independent nation governed by nationalist politicians with great vision.

In thirty-five seconds, mother nature stood against us. Hundreds of thousands were wounded, missing and dead .Life will never be the same. An incredible number of victims have written with their blood, soul, flesh, and earthly possessions, a sad page in our history.

Will the earthquake change our destructive mentality, and our selfish way of life? Or will some of our practices, beliefs, and speeches be altered?
With a strong and progressive government, the people and the international community could have seamlessly work in unisson to limit the damages . But our lack of planning and our short term vision made it more difficult for our leaders to react promptly and swiftly to the disaster.

The peacekeepers from the UN Mission for Stabilization in Haiti (MINUSTAH) would have justified their presence in the Haitian soil if they have made a difference in managing the disaster. They have failed to stabilize and provide security to affected areas and the prisons.

Two months later, the international aid has cover the wound with a band-aid without trying to cure it. The same precarious and hopeless conditions continue in Jacmel, Miragoâne, Petit-Goave, Grand Goave, Leogane, Carrefour, Port-au-Prince and its outskirts. The stagnant government is only concerned about staying in power and seems to be insensitive to the people’s distresses.

The pressing needs are to relocate and care for the homeless and victims for a specified period, to protect lives and property, demolish the damaged buildings, and clearing the rubbles
.
The new settlements in the metropolitan camps appear to be loosing their temporary status to become permanent residence
In such a fragile society whose foundations have been violently shaken, and under those living conditions conducive to abuse, rape, prostitution, insecurity, and spread of diseases, an epidemics and a social explosion is not far-fetch..

The December 23, 1972 ‘s earthquake in Nicaragua can be used as an historical reference to make better choices. The Haitian government’s reactions are identical to Somoza government. The Nicaraguan post-earthquake situation created a social explosion that facilitated the Sandinista resurgence.

.Today, more than thirty-eight years later, in Haiti, history seems to repeat itself. The escape of the prisoners at the National Penitentiary show our police department’s ineffectiveness and the MINUSTAH’s inefficiency . It is important to note, for historical purpose, that MINUSTAH was supposedly in charge of National Penitentiary’s gates.

Port-au-Prince, the country’s economic heart, was deeply affected and what remained after the earthquake was not effectively protected. The representative of the United Nations, Mr. Edmond Mullet, Special Representative of the Secretary General of that organization and head of MINUSTAH, in a meeting on February 3, 2010 with the private sector, clearly stated : ” down town’s security was not our priority”. Bandits, gangs, looters, and arsonists had free reign to continue their criminal activities.

The citizens were left alone to protect themselves and defend their businesses against looters. The National Police with limited resources and without the MINUSTAH’s support was not up to par the task at hand.
.
After the earthquake, the number of nongovernmental organizations (NGOs) has dramatically increased which will conversely weaken more our fragile economy. The miseries of the people become a source of opportunities for others. Many are getting richer through the humanitarian aid. NGOs are not cut to build a viable economy.

The lack of adequate facilities for receiving international assistance, the late response, and lack of governance hindered the whole distribution process. However, it was necessary and beneficial. But today, unless the right channels are used to beef up the local production and manage the distribution of the humanitarian aid, that same aid can be as harmful as destructive to our battered economy.

Politicians usually use natural disasters for political and economical gains. The people are used to their false promises and seem to have lost faith in them. After using the people to attain power, they get richer and offer nothing in return. They prefer to maintain the status quo by fear of loosing their political hold.

Silence is not always golden. Today more than ever, healthy, quiet, and silent citizens must stand up, speak up, and become committed actors for Haiti’s betterment.. Fatalism with its “God is good” can no longer be the best policy. It is time that the silent majority takes its natural responsibility to lead us into greener pasture with everyone’s participation. Haiti belongs to its sons and daughters. The fertile lands remain unexploited. The new generation is entitled to inherit a viable country , not a springboard to reach foreign countries.
.
We do not need the red helmets. The peacekeepers will lead us nowhere.
We need a strong state. We need to create jobs. We need to decentralize the Republic of Port-au-Prince. We need to return to local production. We need an agricultural development program to prevent us from counting exclusively on other nations’ white wheat.
We need to know what our government is cooking? What is taking so long!.

2 thoughts on “Haiti, a nation that refuses to die”