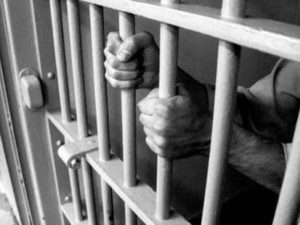 PORT-AU-PRINCE, Haiti (AP) — Two Americans jailed in Haiti were charged with conspiracy for participating in a street march that pressed for the return of the country’s disbanded army, a Haitian government official said Sunday.

Reginald Delva, Haiti’s Secretary of State for Public Security, said Jason William Petrie and Steven Parker Shaw were charged Saturday night because of their involvement in last week’s march. Petrie, 39, is from Barberton, Ohio; and Shaw, 57, is from Dighton, Massachusetts.

“They were providing logistical support,” Delva said by telephone.

Authorities say Petrie and Shaw were drivers for a group of ex-soldiers and their young followers who marched in Haiti’s capital Friday for the army’s return. The demonstration drew hundreds of supporters who donned mismatching military uniforms, including Petrie who wore an army T-shirt and Shaw who wore camouflaged pants.

Petrie, a sometime interpreter for foreigners because of his two-decade involvement in Haiti, told The Associated Press while he was in jail that he knew the leaders of the band of the wannabe soldiers and described them as friends. He was merely lending a hand, he said. Shaw said he was helping Petrie.

“There wasn’t some American plotting against the government or causing instability. I think he got in a little over his head,” the brother of Petrie, Ben, said by telephone from his home in Ohio. “I don’t know what he was thinking but I can say unequivocally that there was no conspiracy.”

Ben Petrie, 37, said his brother had only the best intentions for a country he fell in love with.

“Some would say he has no business getting involved in Haiti’s business, and I would agree with that,” Ben Petrie said. “But he’s tired of the situation in Haiti and wants to see Haiti stand up on its own two feet.”

The pro-army march on Friday began peacefully but turned violent in the afternoon when people began throwing rocks at United Nations peacekeepers and shots were later fired outside an old military base.

Police locked up 48 other people on a range of charges that included possession of illegal weapons and not having paperwork for driving motorcycles. One of the leaders, a former sergeant named Aubin Larose, was charged with assault on a police officer.

Two other Americans and a Canadian were held for questioning for 24 hours in a police station lobby because they tried to bring medicine to Petrie for his diabetes. They were released late Saturday.

The detentions were part of a broader effort by the Haitian government to crack down on the groups of ex-soldiers and their young followers who were pressing President Michel Martelly to honor his campaign pledge of reinstating the armed forces, which was dissolved in 1995 because of its involvement in coups and other abuses.

Haitian authorities repeatedly ordered the armed men and a few women to clear out of 10 bases they had taken over since February but they refused. The leaders, most of them dismissed sergeants, said they wouldn’t leave until Martelly appointed them to an interim military force.

But Haitian police closed two military bases Saturday and a third Sunday morning in the northern city of Cap-Haitien when 100 people inside fled, Delva said.

Delva said authorities learned that the leaders of the group had tricked the younger recruits into thinking that they would be part of the military.

“It was a big scheme, making them think that they were part of an army,” Delva said, noting that the leaders charged recruits up to $125.

Police also found bottles to be used as Molotov cocktails and an expensive generator that raised questions about their source of funding. Some of the weapons they carried, including an M-60, turned out to be broken or fake, Delva said.

There was speculation that the would-be soldiers received funding from the Martelly administration in part because they were able to take over the old military bases and other public facilities without opposition. The leaders of the group denied they received government support, and Delva on Sunday denied it as well.

The men in the military uniforms had come to embarrass the U.N. peacekeeping mission and the Haitian government, which has focused on trying to lure foreign investors and tourists. The paramilitary-like presence of the hopeful troops worried many; they readily recalled a time when previous administrations used private militias to stay in power.