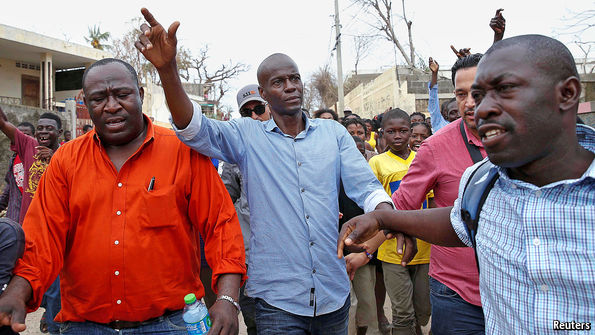 FOLLOWING the example of the United States, Haiti has elected as its new president a businessman with no experience in government. Jovenel Moïse, the smooth-domed nominee of the Haitian Shaved-Head Party (this is where the parallel with the American election breaks down), won outright in the first round of voting, held on November 20th. His plans for governing his impoverished country are fuzzy. If Mr Moïse simply brings political stability, many Haitians will be grateful.

That is no certainty. Last month’s election was a re-run of a vote in October 2015, the results of which were annulled after several candidates alleged electoral malpractice. They included Jude Célestin, a leftist, who had come second to Mr Moïse. He fared no better in the re-run. Mr Moïse beat the field decisively, taking 56% of the vote, according to preliminary results. Haitian and international observers said the election was conducted fairly.

But there are problems. Turnout was a miserable 21%. It was held down by the devastation caused by Hurricane Matthew, which struck Haiti’s south-west in October, and by voters’ disillusionment with politics and elections. Around a tenth of the ballots were deemed invalid by vote-counters. Mr Moïse was elected with just 595,000 votes in a country of more than 10m people.

Three of the nine members of the electoral council refused to approve the preliminary results. Mr Célestin and the two candidates who finished behind him say they will challenge them. Violence has broken out sporadically since the election.

But Mr Moïse’s margin of victory is so massive—he polled 36 percentage points ahead of Mr Célestin—that his victory is likely to be confirmed when the final result is published in late December. He owes his triumph in part to the failure of politicians linked to Fanmi Lavalas, the party of Jean-Bertrand Aristide, a popular two-time former president, to unite around a single candidate. Mr Célestin had to share left-leaning voters with two rivals.

Mr Moïse was lucky in his mentor. He is a protégé of a former president, Michel Martelly, who sports an equally shiny pate (hence the name of the party that supports them). Mr Martelly governed without a functioning congress for nearly a year before stepping down last February. A caretaker has been in charge since. Mr Martelly is not loved, except as “Sweet Micky”, a singer of Haitian merengue, his profession before he became a politician. But he has the backing of businesses, which provided money for Mr Moïse’s presidential run.

Mr Moïse advertised widely and campaigned across the country, looking presidential as he stepped out of his helicopter. The former boss of Agritrans, an organic-banana plantation, he styled himself Nèg Bannann nan (“the banana man”), giving his campaign an appealing folksiness. Though plugged into Haiti’s economic elite, he marketed himself as an outsider. Voters overlooked the millions of dollars in loans that Agritrans received from Mr Martelly’s government.

What sort of president Mr Moïse will turn out to be is a mystery. Like his rivals, he talked a lot about boosting agriculture and manufacturing, and promised to clean up corruption, which was rife in Mr Martelly’s administration. He offered few serious policy proposals. He may follow Mr Martelly in welcoming foreign investment. Some analysts think Mr Moïse, who comes from northern Haiti, will try to rebalance the economy away from Port-au-Prince, which produces two-thirds of the country’s GDP.

Economists hope that Mr Moïse will encourage investment in rural areas, where more than half of Haitians work, and fight deforestation, which exacerbates the effects of hurricanes and other natural disasters. Other priorities are improving infrastructure, strengthening land-ownership rights and reforming the judiciary.

But the new president’s first job on taking office in February, assuming that his victory is confirmed, will be to bring back a semblance of political stability. The vote in November continued the process, which began in August 2015, of electing new deputies and senators to Haiti’s congress. Mr Moïse should appoint members of the opposition to his government, says Robert Fatton, a political scientist at the University of Virginia. A rapprochement with Mr Célestin would help soothe supporters of Lavalas, who are likely to continue their protests at least until the election results are made official. If Mr Moïse fails to win over some of his foes, warns Mr Fatton, “we’ll have a bumpy ride.”