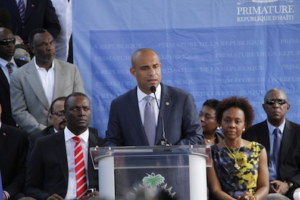 Lamothe will address one of the conference sessions under the theme of “A New Vision for Agriculture” on food security, something which has been one of the major issues for Haiti of late, particularly in light of a pair of storms last year that devastating the country’s crops.

The Prime Minister will also lead a special working session on Haiti planned by the forum’s organizers to focus on Haiti’s business environment.

A statement from Lamothe’s office said his trip in Davos would include meetings with the top officials of of Coca-Cola, Western Union, Petrobras, SalesForce, Marriott Hotels and Heineken to discuss potential investment opportunities in Haiti.

Marriott is currently developing a hotel in Haiti in partnership with Digicel.