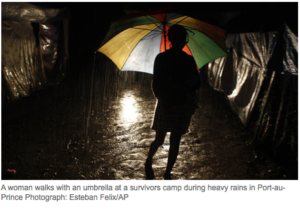 There were floods on Saturday in Les Cayes, in southwestern Haiti. It rained in Port-au-Prince on Thursday, and again on Saturday and Sunday night, long enough to slick the streets and make a slurry of the dirt and concrete dust. Long enough, too, to give a sense of what will happen across the country in a few weeks, when the real storms start.

Mud will wash down the mountains, and rain will overflow gutters choked with rubble and waste, turning streets into filthy rivers. Life will get even more difficult for more than a million people.

New misery and sickness will drench the displaced survivors of the Jan. 12 earthquake — like the 16,000 or so whose tents and flimsy shacks fill every available inch of the Champ de Mars, the plaza in Port-au-Prince by the cracked and crumbled National Palace, or the 70,000 who have made a city of the Petionville Club, a nine-hole golf course on a mountainside above the capital.

The rainy season is the hard deadline against which Haiti’s government and relief agencies in Port-au-Prince are racing as they try to solve a paralyzing riddle: how to shelter more than a million displaced people in a densely crowded country that has no good place to put them.

The plan after the quake was to move people to camps outside the city. But in a sudden shift last week, officials unveiled a new idea. They would try to send as many people as possible, tens of thousands, back to the shattered streets of Port-au-Prince before the rains come. The prime minister approved it on Friday.

If it sounds insane, insanity is relative in Haiti now. Consider the choices:

¶Let people stay in filthy, fragile settlements where no one wants to live, and pray when the hurricanes hit.

¶Build sturdy transitional housing in places like Jérémie, in the southwest, that can absorb the capital’s overflow.

¶Encourage people to return to neighborhoods that are clogged with rubble and will be for years, where the smell of death persists. In areas like Bel Air and Fort National, near Champ de Mars, people whose homes still stand are sleeping outside, in fear of aftershocks. They were still pulling bodies out of Fort National over the weekend, burning them on the spot.

The first plan is intolerable. The second may come true only several years and hurricanes from now. The third is merely absurd.

Officials believe that if they clear just enough rubble from certain areas of the city and improve drainage in flood-prone areas, they can ease the pressure on the camps and save lives. It makes some sense to keep people near their neighborhoods, holding on to what remains of their lives and livelihoods.

But when what remains is nothing, it’s hard to make sense of that idea. Harder still when you realize that the Haitian government and aid agencies are still overwhelmed by the crisis. The government hasn’t even figured out where to put the rubble, and doesn’t seem to know who is living where.

Official word was that 80 percent of refugees in Champ de Mars were from Turgeau, where debris-clearing is to begin. I talked with about 40 people throughout the Champ de Mars. They were from Bel Air, Fort National, St. Martin. Nobody was from Turgeau. Several knew of the plan and a few had registered for it. But nobody had been told where, when and how they would leave.

Pascal Benjamin, a 29-year-old huddled with family on the edge of the Champ de Mars, is from Bel Air. “I heard they were going to find a place, but they never came to talk to us.”

I spoke with Selondieu Marcelus, his brother, Sony, and nephew, Ricardo. They were standing beside a yellow tent marked with sardonic graffiti. “Donnons le pays aux Français,” it said. “Let’s give the country to the French.”

Mr. Marcelus once lived on Rue Macajoux in Bel Air. He lost his wife there. He didn’t know where he would end up. As long as the place has work, jobs, electricity, I don’t mind, he said. He was unusual. Most of those I met, in Champ de Mars and in the vast blue-and-orange tarpscape blanketing the Petionville Club, said they dearly wanted to go home.

It seems certain that this plan for Haiti’s displaced is going to be ineffective, and that people will suffer and die for lack of anything better. The only rational plan for Haiti is to disperse the population of a city that filled to bursting years ago. Making it easier for people to shoehorn back into Port-au-Prince, looking for jobs and space that don’t exist, is ludicrous.

It’s a sign of the scale and perplexing nature of this disaster — and the fix faced by the government that is too slowly confronting it — that the ludicrous option is the only one available.

The ludicrous option is the only one available because it is one that requires no one to do anything. Just leave the people alone and the strongest will survive, the rest will be eliminated from the statistical balance.

President Preval will not have to have his attention drawn from his conspiracy to steal and sell all humanitarian material for his own account, an those of his close associates.

CNN had a short piece in which Leslie Voltaire, introduced as the guy Preval has chosen to rebuild Haiti, was interviewed. It was an impressive scene. He was standing in front of a shabby 4 x 8 foot folding table with some sort of blueprint on it. The wall behind hosted a map of  Haiti stuck there with cello tape. The room looked like someone’s storage area.

In a very strange comment…Voltaire said the government had tens of thousands of tents awaiting distribution. They were waiting to complete a survey to tell the government which building would have to be destroyed and which would be repaired.

This really didn’t deal with the tents, or their distribution. Are we to suppose that these tents will sit in Government warehouses for months – probably yerars – until a final decision on the yes/no question for destruction/reconstruction is made??

Our information suggests that Preval has already said he wants this commission to do nothing. In other words, the decision on what to do with existing structures will not be made and – obviously – the tents will no be distributed.

In a real society, someone could be charged with attempted murder for such a criminal decision.

With the leave Haitians alone concept, MINUSTAH will not have to change its do-nothing formula.

UNICEF and other well-meaning groups will be able to focus on blocking adoptions with the belief that these poor kids will be better off living in the filth and rubble of a destroyed Haiti that they would be with a foreign family outside the country.

As an adoptee – for example – in the States, a child might become Governor of California, a doctor, lawyer, school teacher….

Remaining in Haiti is no guarantee of minimal survival with the ever-increasing threat of disease, famine, closed schools and violence. Schools will remain closed until next year.

It is only a matter of time until the world’s attention is focused elsewhere and the Haitians will be allowed to die, ignored, yet again, by the International Community.

Why doesn’t someone speak up and call a spade for a spade and reveal the criminality of the Preval government?!!

Until this is done, there is no Hope!!

Pussy-footing and trying to be diplomatic has no place here.