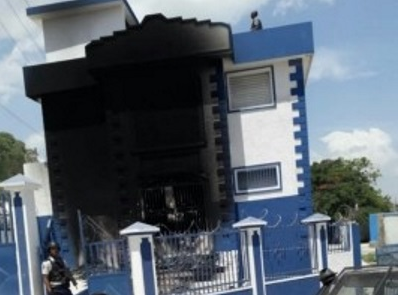 Police have restored order to Savane Pistache, the second district in the capital, Port-au-Prince, after heavily armed gunmen set fire to several buildings and demanded the release of at least 17 people detained during an earlier exercise by law enforcement officials.

The police had detained the suspects as they continue their investigations into the attempted assassination of Éric Jean Baptiste, secretary general of the Rassemblement des Démocrates National Progressive (RDNP), on December 21.

Eyewitnesses said that members of the powerful and dangerous gang, “Tije”, descended on the area on Christmas Day demanding the release of those detained.

They set fire to the police sub-station and also to the homes of several police officers.

Residents of the area remained in doors in fear of their lives while sporadic bursts of automatic weapons caused panic and terror. The gunmen are also reported to have looted several businesses.

The eyewitnesses said that special units of the Haitian National Police intervened to restore order, confronting the gunmen.

The police have so far not issued any formal statement on the incident.