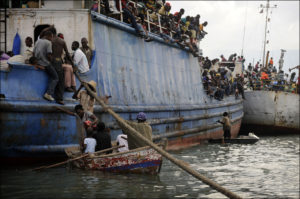 MIAMI (AP) — A history project featuring people who worked or were held at the U.S. naval base in Cuba has arrived in Miami.

Haitians fleeing their Caribbean homeland after President Jean-Bertrand Aristide’s 1991 ouster were held there after being intercepted by the U.S. Coast Guard. Most eventually were returned to Haiti.

In 1994, the base also held Cubans caught at sea after Fidel Castro announced anyone who wanted to leave the island could flee. Most eventually were allowed to stay in the U.S.

The project continues Aug. 23 at HistoryMiami, where people are invited to share memories and artifacts from Guantanamo. Exhibits and panel discussions will continue next month at Florida International University and the University of Miami.

COMMENT: HAITIAN-TRUTH.ORG
People overlook some of the facts.
First of all, many people fled on boats because of economic reasons.
Few had political reasons.
Aristide paid people to get on the boats, in order to pressure the Clinton government. The month that saw Clinton decide to invade had 16,000 Boat People. Once he decided, the next month had 334. There is a message here, if anyone listens.
And the Guatanamo site has a special area where people, who asked for repatriation, were pressured to demand Political Asylum, with staff ready to brief them on the questions and answers that would guarantee entry to the States. This is a criminal offense.

Aristide was a murdering, thieving, cocaine smuggling, child-molesting, anti-American ex-Priest. Perhaps I have left something out, but these factors are enough to jail him – under civilized law – for life.