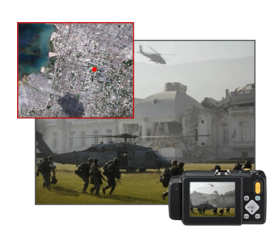 Geo Tactical Solutions (GTS) promotes the use of advanced GPS cameras and photo mapping technology for disaster response and management at IDCE 2012. Geospatial photo technology played an essential role in the 2010 Haiti earthquake relief efforts and continues to be an important element of maintaining accurate and current situational intelligence for supporting the slow recovery of the Haitian population and infrastructure.

The 2012 International Disaster Conference and Exposition (IDCE) brought together many of the most innovative companies and distinguished professionals from around the world in the field of disaster preparation, response, recovery and mitigation. As population density increases and the built landscape expands, humanity is becoming more susceptible to natural disasters than ever before. This harsh reality has led to the research and development of better management practices and technology for preventing, mitigating and responding to such unexpected and devastating events.

Geo Tactical Solutions (GTS), a leading provider of advanced GPS-enabled cameras and photo mapping software, was one of many private companies to exhibit geospatial intelligence solutions for disaster response operations at IDCE. “This year’s International Disaster Conference and Expo provided us with a great opportunity to share our involvement in Haiti and promote the use of geospatial photo technology for supporting disaster response efforts,” said Todd Lushinsky, Sales and Support Manager at GTS. “Giving responders the ability to quickly capture and share geo-referenced photographs that deliver on-the-ground situational intelligence is extremely useful in coordinating and directing resources.”

January 12, 2012 marked the second anniversary of the catastrophic magnitude 7.0 earthquake that shocked Haiti in 2010. More than 300 thousand people lost their lives and millions more were injured and left homeless. Hundreds of thousands of homes, roads, schools and hospitals were damaged or destroyed, leaving Haiti’s infrastructure broken and most of the surviving Haitian population helpless. As with any natural disaster of this magnitude, timely and accurate intelligence on the ground and from the air was critical for identifying priority areas, assessing damage and getting people and supplies to where they were needed most.

In support of the U.S. Navy’s relief efforts in Port-au-Prince, Haiti’s Capitol, GTS provided advanced GPS-enabled cameras and image mapping software to facilitate the collection and dissemination of geospatial photographic information. This data was, and is currently being used in conjunction with a wide range of mapping applications to provide a common operational picture of the region to help responders get supplies and people into the most troubled areas. “With GPS and ‘memo’ capabilities, each photo collected with our GPS cameras tells the story of who, what, when, where and why of the situation,” explained Mr. Lushinsky. “Having detailed photographic information from the ground [in addition to satellite and aerial imagery] is a critical component for providing a more complete picture of the chaotic operational environment.”

Geospatial data continues to be collected and utilized every day in support of Haiti’s slow recovery. As the Haitian landscape continues to change from roads being cleared, homes and hospitals being built, and people frequently migrating, the situational intelligence guiding the relief efforts must be constantly updated. An estimated 4.6 billion dollars have been donated for the relief efforts and so far a little more than 2.38 billion has been spent. A big part of spending that money depends on knowing exactly what resources are needed where. As the technology used to acquire, analyze and share that information improves, emergency response organizations are able to deliver targeted support and use money and resources more efficiently. As NGA Director Vice Admiral Murrett explained in an issue of NGA’s Pathfinder shortly after the Haiti earthquake, “When manmade or natural disasters strike, geospatial intelligence (GEOINT) saves lives…”

“GTS is constantly developing and improving our solutions to better meet the intense demands that occur during disaster situations,” noted Mr. Lushinsky. “Since the Haiti earthquake, GTS has improved our GPS cameras and modules to allow for faster, more accurate data collection and seamless interoperability with GIS and database applications. The other half of the challenge is building awareness of this technology and getting it into the hands of the right people who can use it to make a difference.”