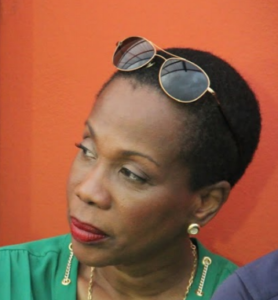 This shows you how stupid some of Michel Martelly’s supporters can be. George Racine, and his wife Magali, have eaten at the Martelly trough since his inauguration, as friends of the family. Because of this, Magali became Minister of Sports, a position she filled with less than competence. In fact, she filled it with nothing other than well-manicured nails, a neat hairdo, and exquisite clothing. George had hoped to fill key government slot but was barred because he is an American citizen.

George and Magali Racine have made a lot of money because of the involvement. It is now time for the Ministry of Sports to be run by a competent hand – Colonel Himmler Rebu.

It is not in George and Magali Racine’s best interests to shoot at Laurent Lamothe. To do so also damaged President Michel Martelly and the positive things he and Lamothe are doing for the nation.

Small people do small things and the proposed anti-Lamothe manifestation – funded and supported by Georges Racine reflects the truth of this. Personal interests take precedence to those of the Nation.

We will keep you posted on the Racine Manifestation Project as it develops.