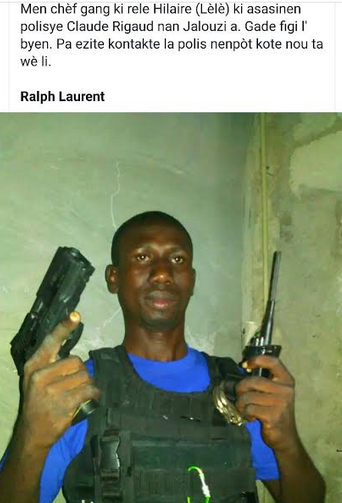 Gang leader Hilaire Lele who assassinated PNH officer Claude Rigaud on Sunday tried to hide in Cite Soleir. He was killed by another gang there, or by PNH officers.

No word on what will happen to Petionville Mayor St. Roc, who had Lele released from the Petionville PNH Caserne immediately after his arrest on Sunday.

ALSO – THE PICTURE THAT WAS RELEASED DOES NOT SHOW LELE. SOME SUGGEST ST. ROC USED THIS PHOTO OF ANOTHER MAN TO DEFLECT THE SEARCH.

Time for an  end to impunity.

This is a first step