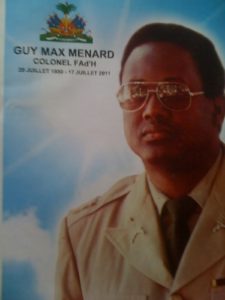 Several hundred friends traveled to St. Pierre to say good bye to their old friend Max Guy Menard, a Colonel in the Forces Armees d’Haiti. Guy recently lost an ongoing battle with diabetes that had ravaged his body for several years.  Insulin was in short supply and he was forced to get by without or, on lucky occasions, split his available medicine in half, to make it last longer. Such is the situation in Haiti where many die simply because there is no medicine when required.

Guy Menard was one of the good people who believed in their country and did their best to make it work.

He will be missed