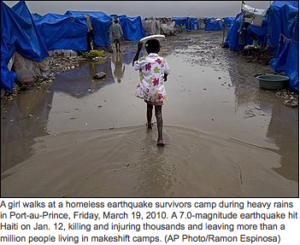 PORT-AU-PRINCE, Haiti — One restored a Haitian president to power; the other flew him back out again. Former U.S. presidents Bill Clinton and George W. Bush are visiting Haiti on Monday, reminding the country of its tumultuous recent past just as frustration over an uneven earthquake relief effort is bringing politics back to the surface.

The ex-presidents are spearheading U.S. fundraising in response to the Jan. 12 earthquake. Tapped by President Barack Obama for the role, they are making the one-day visit to assess recovery needs.

Charged memories of their policies toward the impoverished Caribbean nation are already mixing with frustration over deplorable living conditions among the 1.3 million homeless quake survivors. Supporters of ousted President Jean-Bertrand Aristide have scheduled protests for Monday – demanding the return of their exiled leader and pleading for more aid.

“We are going to bring our message to the presidents, that our situation here is no good. The way people are living in Haiti is no way for anyone to live,” said Fanfan Fenelon, a 30-year-old resident of the Bel Air slum.

Monday will be Bush’s first trip to Haiti. Clinton, who is the U.N. special envoy to the country, has made two visits since the quake and five in the past two years. He also visited as president.

The pair will arrive in a country struggling to feed and shelter victims of the magnitude-7 quake, which killed an estimated 230,000 people. Hundreds of thousands still live in dangerous camps, some already flooding ahead of the April rainy season.

On Sunday, a small earthquake caused an apartment building to collapse in the northern city of Cap-Haitien, killing at least three people, according to U.N. spokesman Louicius Eugene. Three people were rescued from the rubble.

President Rene Preval’s government has criticized non-governmental organizations for not being accountable to the Haitian state. In turn, Haitian officials have been accused of ineffectiveness and corruption. On Tuesday, a group of Haitian and U.S. human-rights advocates will ask the Organization of American States for an inquiry into why $2.2 billion in aid has not helped more people.

Those exchanges will only grow more heated with the approach of the March 31 donors’ conference at the United Nations, where the Haitian government will ask for $11.5 billion.

Enter Clinton and Bush, an unlikely duo that have arguably shaped Haiti’s history as much as anyone alive today.

Clinton presided over a refugee crisis borne of the 1991 ouster of Aristide, Haiti’s first democratically elected president. He returned Aristide to power in 1994 with a force of 20,000 U.S. troops.

Many of the country’s elite have disliked him ever since. Aristide’s luster dimmed for others as his two nonconsecutive terms gave way to accusations of rigged elections, pocketed foreign aid and attacks on opponents.

Bush is acutely remembered by many Haitians – especially the thousands in Port-au-Prince’s teeming slums – as the U.S. leader whose administration chartered the plane that flew Aristide back into exile during a 2004 rebellion, then backed an interim government that carried out reprisals against his supporters.

“We don’t have a very good ‘souvenir’ of President Bush, as you might suppose,” said Patrick Elie, who served as a defense official under both Aristide and Preval. “I hope that this crisis is not another opportunity to weaken the Haitian state even more.”

Business leaders and others in positions of power are excited for the presidents’ visit.

“The fact that two presidents of the United States are coming to visit is proof that the subject of the reconstruction of Haiti is not a partisan issue,” said Patrick Delatour, Haiti’s tourism minister and part-owner of a construction company who was tasked by Preval with leading reconstruction efforts.

The nonprofit Clinton Bush Haiti Fund has raised $37 million from 220,000 individuals including Hollywood actor Leonardo DiCaprio, who gave $1 million, and Obama, who among other donations gave $200,000 of his Nobel Peace Prize. About $4 million has gone to such organizations as Habitat for Humanity, the University of Miami/Project Medishare mobile hospital in Port-au-Prince and the U.S. branch of the Irish charity Concern Worldwide.

The rest has yet to be allocated. There is heated discussion, inside Haiti and out, about where future funds should go.

James Morrell, director of the Washington-based Haiti Democracy Project, said he welcomes the ex-presidents’ efforts but that government corruption will block any serious effort to develop the country.

“They need to go back to Obama and say, ‘Let’s not put all our eggs in one basket,'” he said.

Others want nothing to do with the visit at all.

“Those people have a lot of money. They could do something for Haiti, but they haven’t done it,” said So An, a powerful leader of Aristide’s Fanmi Lavalas party. “I don’t want any words from now on, I want action.”

On a street corner in the Bel Air slum this weekend the debate over the presidents’ visit was already under way.

Neighbors crowded into a narrow alley behind partially collapsed buildings to shout their opinions: Bush is bad, Preval ineffective and Clinton disappointing as U.N. envoy.

But all agreed – they’ll take any help they can get.

Remember what we told you days ago, when Preval allocated the cash to hire demonstrators.   Any demonstrations against the Bush/Clinton visit were organized  by President Preval, NOT Aristide.

And could the writers stop referring to Aristide as the first democratically elected president in Haitian history. He was about the fifth to be elected democratically. Francois Duvalier was another.

Patrick Elie is another notable one. After his arrest by America’s Secret Service, Elie spent several years in jail for attempted murder, a crime involving some sort of love triangle. I think it was one of those Male/Male things that got out of hand, but Elie was convicted of this and weapons charges.

He was also responsible for the bomb explosion at Aristide’s December 5, 1990 meeting in Petionville. He has publicly claimed responsibility, with pride. Many were killed and dozens horrible maimed by Elie.

In any event, just remember that whatever happens on Monday was/is the result of Preval’s actions in an effort to embarrass the US Government and Aristide.