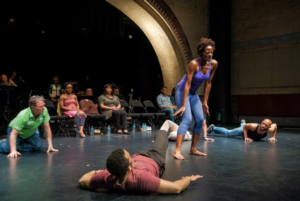 A rehearsal for ‘Makandal’ at the Harlem Stage Gatehouse.

Supernatural figures and vast stretches of sea or sky dominate the work of Haitian-born visual artist Edouard Duval-Carrié. But when poet and playwright Carl Hancock Rux first encountered Mr. Duval-Carrié’s art, he saw something else entirely. “I decided I wanted to write an opera that looked at Haiti, and I wanted it to be born out of the imagination of this man’s art, as well as grounded in history,” Mr. Rux said.

Now, after more than five years of writing, researching, false starts and long pauses, Mr. Rux’s opera is coming to fruition. “Makandal,” an opera rooted in the history of the 18th-century revolutionary leader Francois Makandal, will have its world premiere next year as a production of Harlem Stage, the performing-arts center dedicated to contemporary work by artists of color.

Along the way, Culture City will be dropping in occasionally to watch the creative process as this production makes its way from rehearsals to opening night at the Harlem Stage Gatehouse, the 196-seat venue at 135th Street and Convent Avenue. Not only is this an ambitious opera—with a historical basis, a mythical ethos and a contemporary story of immigration—it is also a major step for Harlem Stage, which has produced works in the past but not quite on this scale.

Brad Learmonth, director of programming at Harlem Stage, estimates that the full production will cost about $750,000. About a third of that has been raised; the company is in talks with other venues in America and abroad that could potentially help foot the bill and present the work, which is now a common method for bringing large-scale productions to the stage. “We are looking at different ways we can build the organization out beyond its walls,” said Mr. Learmonth. “We want [shows] to have a life beyond the three or four nights here.” 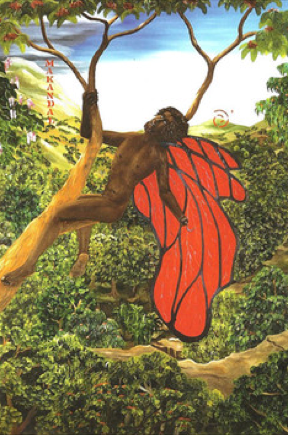 “Makandal” already has blossomed at two cultural institutions. Mr. Rux conceived the project during a three-year residency at the Miami Performing Arts Center (now the Adrienne Arsht Center for the Performing Arts of Miami-Dade County). After he was selected in 2005, he was asked to create a work that would respond to the Miami community; as he began interviewing local Haitians and Cubans, he realized that the different ethnic groups often had overlapping histories. Meanwhile, he saw Mr. Duval-Carrié’s work, which had images of “people trying to cross the water with gods, spirits and ancient slaves rising up out of the water,” he recalled. “They’re fantastical. They mix the present-day reality with ancient lore in a very beautiful, rich way.”

The ideas coalesced into a plan for an opera based on the history of Makandal, who led a slave uprising that, though unsuccessful, led to later revolts. The Miami center found a producing partner in Harlem Stage, which has since become the producer and lead commissioner.

The first completed element was Mr. Rux’s libretto, which had a first reading in 2008 with Harlem Stage. As for the opera’s music, though Mr. Rux has made three albums (in addition to collections of poetry and a novel, “Asphalt”), he chose to collaborate with a composer for this project. “I’m a poet who has taken music classes and made some recordings, but it doesn’t mean I am ready to write an opera,” he said.

That task wound up in the hands of the classically trained Cuba-born composer Yosvany Terry, who has a bold way of blending jazz and Afro-Cuban rhythms with a contemporary sensibility. “It’s challenging, with complicated rhythm,” said Lars Jan, the director of “Makandal,” who in a May workshop heard the work performed for the first time with a full complement of musicians and the cast of singers. “I’d never heard it live with full orchestration with all of the voices,” he said. “I’d only heard it with the piano line. That was crucial to seeing the piece and understanding what it really is.”

His plan for the piece is to clarify the shift between the contemporary, historical and mythic worlds with visuals that will include Mr. Duval-Carrié’s art, as well as video footage shot in Haiti with cinematographer Andreas Burgess last summer. His next step is to work with a design team to create a framework in which to present the images. “The story is complex, and there are a lot of characters,” he said, noting that there are about 20 roles for the nine singer-actors.

After seeing the piece on its feet, Mr. Jan and Mr. Rux saw places to make changes. Because the libretto was written before the devastating 2010 earthquake in Haiti, the creators have been considering ways to revisit that. And history may be the way: There was also a serious earthquake during the time of Makandal. “It was later, when things settled down after that earthquake, that he decided to start a rebel community,” said Mr. Rux.

The process of weaving in new threads and reworking portions was untroubling to Mr. Jan. “No one is preconceiving this entire thing. We’re all putting it up and perceiving it and responding to what is illuminating,” he said. “If you have the time and space for the artists to orient themselves to a vision they share together, that’s a luxury.”

Write to Pia Catton at pia.catton@wsj.com

A version of this article appeared June 30, 2013, on page A24 in the U.S. edition of The Wall Street Journal, with the headline: From Haiti Roots, a Rebellious Opera Springs.