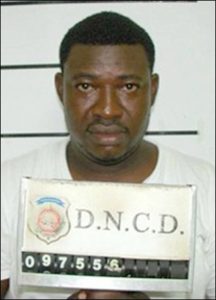 President Rene Preval has long been recognized as controller of Haiti’s major gangs. Immediately after his inauguration, President Preval held a controversial dinner at the National Palace. The invited guests were key gang-leaders from around Haiti. Instead of arresting them, Preval feted them with a luxury dinner and champagne as MINUSTAH troops ringed the palace.

When MINUSTAH started to close in on Duclona he fled to the Dominican Republic with a false passport, obtained by Jude Celestin. On the night before he was smuggled into the DR, Duclona stayed at the home of Preval’s  sister .

In September 2009 Duclona was arrested.

The following is an article from a Haitian newspaper, that appeared in French, shortly after Duclona’s September, 2009 arrest and extradition to France. His interrogation was detailed and he listed a number of people he killed, on the direct orders of Jude Celestin and Rene Preval.

TRADUCTION OF ARTICLE INTO ENGLISH

THE PRESIDENT BACKS THIS MAN!!!

His name is Amaral Duclona.His dwelling today is a prison cell in France, where he awaits trial for the murder of a citizen of that country, in Port-au-Prince, Haiti.Mr. Duclona was arrested by the police of the Dominican Republic sometime last year, under an alias.

A well known leader of one of the violent gangs that rule different areas of Port-au-Prince, Mr. Duclona murdered a lot of people in Haiti, including some citizens of the United States, in addition to a French diplomat.

Amaral Duclona was also a hired gun in Haiti, handsomely paid to assassinate those who angered his clients, the list of whom, he confessed, includes the current President of Haiti Mr. Rene Preval,

and a deeply intimate friend of both men, one Jude Celestin who helped them embezzle and stash away huge sums of money that belong to the people of Haiti

Credible news reports informed the general public in Haiti that police and judicial authorities of the Dominican Republic sought the assistance of the President of Haiti to help identify positively Mr. Duclona, who claimed to be a best friend of the former. Mr. Preval obliged, especially after it became widely known that it was he who, for years, helped this most wanted individual escape every trap laid out by the Haitian National Police or by international police forces. As Mr.

Duclona revealed to police investigators, every time his capture was imminent, he would simply dial his best friend Mr. Rene Preval, the sitting president of Haiti, to the rescue. An accommodating Mr. Preval would then instruct his minions to rush to pick-up and transport Mr. Duclona to the Haitian National Palace or to the home of the president’s sister, where the latter would remain as a valued guest until the threat receded. In violation of his oath of office, the president of Haiti aided and abetted a notorious criminal fugitive.

Mr. Duclona also confessed that he personally kidnapped and executed Mr. Robert Marcello, the former head of the CNE – a state agency that manages the acquisition, maintenance and use of heavy construction equipment – at the request of Mr. Jude Celestin, President Preval’s closest and profoundly intimate friend who, at the time, was dating the president’s current wife, now the first lady of Haiti.

Mr. Marcello’s crime: as head of the CNE, he had refused to just fork over a contract worth over $ 97 million U.S. dollars to Mr. Celestin, without a public competitive bidding process. Mr. Marcello had just vanished into thin air, and his body had never been recovered until Mr. Amaral Duclona confessed to his assassination. After Mr. Marcello’s disappearance, President Preval named the latter’s assassin, his profoundly intimate old friend Mr. Jude

Celestin to replace the unfortunate Mr. Macello as the CNE’s new Chief Executive Officer, a position Mr. Celestin holds until this very day, in spite of the serious allegations leveled against him by the infamous Amaral Duclona in confessions to police and judicial authorities of the Dominican Republic, France and the United States, three countries whose friendship, good will, cooperation and guidance remain essential in the arduous undertaking of pulling Haiti out of the abject poverty that is a causing so much embarrassment not only to Haitians everywhere, but to our entire hemisphere. Yet, not a single official of the Haitian government, the Haitian parliament or the Haitian National Police called for even a cursory investigation of the criminal activities of Mr. Preval and his profoundly intimate friend, Mr. Jude Celestin.

But, that’s not all. In a new affront to the people of Haiti, to the Dominican Republic whose police forces diligently arrested and deposed Mr. Amaral Duclona, to France whose legal authorities worked very hard to obtain Mr. Duclona’s extradition to their country for his crime against one of their diplomats, and to the United States whose several citizens have been kidnapped and murdered by President Preval’s associate, Mr. Amaral Duclona, who also toiled as a hired gun for murder on behalf of Mr. Jude Celestin, the latter has just been named by President Rene Preval, along with Haiti’s First Lady, as one member of a committee of three in charge of the reconstruction of post-earthquake Haiti.

The accusations of murder, aiding and abetting a notorious fugitive, and embezzlement of public funds, especially international aid money, are very serious criminal offenses leveled against President Preval and his acolytes. No Haitian institution is strong enough to brave Mr. Preval’s dictatorial powers and awesome murderous inclinations, formally and officially exposed by Mr. Amaral Duclona who is currently enjoying a prison cell in France.

In addition, the government of Haiti’s virtual blocking of international aid through the newly imposed assistance tax, and their insistence that international aid be channeled through them, which should be discouraged because of their record of mismanagement and embezzlement, are denying millions of earthquake victims the assistance they direly need in food, clean water, strong temporary shelter and medicines. Because of the government of Haiti’s actions, hundreds of thousands of distressed Haitians cannot be and cared for in a manner commensurate to the international community’s formidable commitment to help.

Moreover, because such actions may lead to another major humanitarian catastrophe, of the government of Haiti’s own doing, this time around, they rise to the level of a crime against humanity, the complete commission of which the international community must act to prevent first, and to punish, afterward, any and all of Haiti’s leaders found to be responsible for this new round of calamity. Such an odious crime cannot go unpunished. Not this time, as candidate Obama used to say to the wild applause of his supporters during his campaign for the U.S. presidency.

Not this time, I also say to you today, which is why we must once and for all put an end to this expectation of impunity that causes Haiti’s corrupt and murderous leaders to refuse to relinquish the political power they hold and facilitate the emergence of able, competent and honest leadership, no matter how profound the pain and suffering they inflict on their own defenseless population. There is no tradition of resigning one’s position in the political culture of Haitians, unfortunately, and these serial and unrepentant criminals will not put the key under the rug and leave willingly and quietly.

These so-called leaders of Haiti, whose actions would guarantee them a long prison sentence, under the federal RICO legislation in the United States, for having transformed the government of their country into a vast and unrelenting criminal enterprise, have now also left the international community with no other choice than to exercise in Haiti a duty to intervene forcefully to save hundreds of thousands of Haitians from a looming new humanitarian catastrophe of their own government’s doing. Thousands of children may die, along with their parents in events leading to avoidable casualties.

Not this time. We cannot tolerate nor will we accept this brazen crime against humanity, with the world watching. So, let’s round up these criminals who called themselves a government in Haiti, and arrest them all before it’s too late in that suffering country. The United States, and France should call for an urgent meeting of the U.N. Security Council and lead the international community into the forceful action that is now required against President Preval, Prime Minster Bellerive, Mr Jude Celestin, and their ruthless accomplices in Haiti. Again, let’s round up these unrepentant criminals, and arrest them all in the name of the common humanity shared by all the different people on Earth, including Haitians.

1 thought on “FROM FRANCE: AMARAL DUCLONA’S TESTIMONY TIES PREVAL/CELESTIN TO MARCELLO AND FRENCH CONSUL’S MURDERS, PLUS OTHERS”