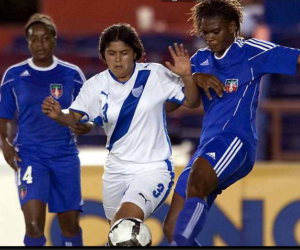 CANCUN, Mexico – Adeline Saintilmond scored her first goal of the tournament and Haiti defeated Guatemala 1-0 on Monday in the final game for both at CONCACAF Women’s World Cup Qualifying.

Saintilmond, who led Haiti with three goals in five games in Caribbean qualifying, tallied in the 22nd minute with a remarkable individual effort to finish the Haitians in third place in Group B with three points behind the United States and Costa Rica.

Guatemala, which had won both of its previous matches against Caribbean opponents in the CONCACAF women’s championship, conceded its first goal to a team from the region and ended up last in Group B with no points and outscored 11-0.

Saintilmond scored after receiving the ball with her back to goal at the edge of the penalty area and surrounded by Coralia Monterroso, Kimberly de Leon and Londy Barrios. She twisted her way free and created space on the left side of the area before softly striking a slow roller with her left foot past onrushing keeper Maricruz Lemus from eight meters.

It was the first goal in the CONCACAF finals for Haiti, which was beaten 5-0 by the United States and 3-0 by Costa Rica.

Haiti played without captain Kenci Marseille, who was suspended due to accumulated yellow cards.

Regardless, it had the better of possession and chances early, albeit both sides struggled to generate quality opportunities that tested the opposing goalkeepers.

Guatemala managed only a handful of shots in the first half, and put its first on goal in the 48th, when Haiti goalkeeper Geralda Saintillius had to go low at her right post to block Wendy Pineda’s left-footed try over the byline.

But the early chance heralded a 10-minute period of dominance by “Las Chapinas”, who also forced Haiti defender Samantha Brand to clear a ball from in front of the her own goal with Daniel Mendez closing.

However, Haiti soon restored control and Saintilmond tested Lemus in the 61st, taking a cross from Brand, cutting inside Monterroso and forcing the Guatemalan keeper to make a reaction save at the left post. Lemus also had to smother another Saintilmond chance in the 77th, blocking the Haitian striker from less than a meter that momentarily left her prone on the field.

Guatemala attempted to counter and had its forays, such as the in 74th when Mendez’s through ball to Pineda nearly connected before Haiti back Fiorda Charles was able to shoulder her off the ball and clear the danger.

It’s closest moment came in the 86th when Ana Lucia Martinez’s right-footed shot from 22 meters arced over the outstretched arm of Santillius, but crashed off the bar.