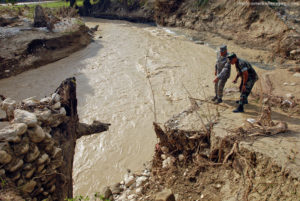 NEW YORK — A slower-than-usual hurricane season is expected this year because of an expected El Nino, federal forecasters said Thursday, but they warned that it takes only one storm to wreak havoc and urged Americans to be prepared.

The El Nino, which warms part of the Pacific every few years and changes rain and temperature patterns around the world, will likely reduce the number and intensity of tropical storms and hurricanes, the National Oceanic and Atmospheric Administration said in New York City.

Cooler temperatures on the surface of the Atlantic Ocean compared with recent years will also lower the probability of hurricane formation.

Bell cautioned that El Nino has not yet developed and officials have not yet issued any forecasts for it.

Officials expect about eight to 13 named tropical storms and three to six hurricanes. One or two major hurricanes with winds over 110 miles per hour are forecast.

Forecasters got it wrong last year when they predicted an unusually busy hurricane season. There were 13 named storms and two hurricanes, Umberto and Ingrid, both of which were Category 1, the lowest on the scale that measures hurricanes by wind speed. There were no major hurricanes.

In 2012, storm surge was devastating to the New York area when Superstorm Sandy slammed the East coast, killing 147 people and causing $50 billion in damage. Sandy lost hurricane status when it made landfall in New Jersey.

A new mapping tool this year will keep coastal residents updated on the storm surge threat, using tides and currents to predict how high the surge might be and where exactly it will hit, said Dr. Holly Bamford, director of NOAA’s National Ocean Service.

“Storm surge can be deadly,” Bamford said. “It only takes six inches of fast-moving water to knock an adult over.”

The map will be activated when a hurricane or tropical storm watch is announced, or about 48 hours before the onset of tropical storm force winds, and updated along with National Weather Service advisories every six hours.

New York City officials also launched “Know Your Zone,” a hurricane awareness campaign that is being billed as a “one-stop-shop” for hurricane preparedness. New Yorkers can go onto the city’s website (http://nyc.gov/knowyourzone ) to find out which evacuation zone they reside in and other critical storm-related information.

“The effects of Sandy make it clear why you must be prepared,” said Joseph Bruno, the city’s commissioner of the office of emergency management.

The Atlantic hurricane season goes through cycles of high and low activity about every 25 to 40 years based on large scale climatic patterns. Since 1995, an average season has 15 named tropical storms, eight hurricanes and about four major storms. The last time a major hurricane made landfall in the U.S. was when Wilma came ashore in 2005, an eight-year stretch that is the longest on record.