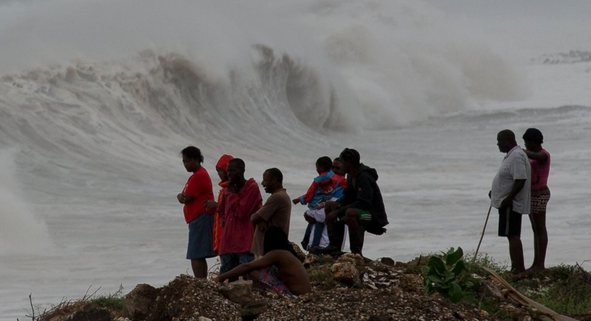 FORT LAUDERDALE, Fla. (CBSNewYork/AP) — Hurricane Matthew marched toward Florida, Georgia and the Carolinas and nearly 2 million people along the coast were urged to evacuate their homes Wednesday, a mass exodus ahead of a major storm packing power the U.S. hasn’t seen in more than a decade.

Matthew was a dangerous and life-threatening Category 3 storm with sustained winds of 120 mph as it passed through the Bahamas, and it was expected to be very near Florida’s Atlantic coast by Thursday evening. At least 16 deaths in the Caribbean have been blamed on the storm, with heavy damage reported in Haiti.

The National Hurricane Center said in a statement that life-threatening wind and storm surge could leave parts of northeast Florida and southeast Georgia “uninhabitable for weeks or months.”

The storm was forecast to scrape much of the Florida coast and any slight deviation could mean landfall or it heading farther out to sea. Either way, it was going to be close enough to wreak havoc along the lower part of the East Coast, and many people weren’t taking any chances.

Gov. Rick Scott said he didn’t know how many people would be ordered to leave the coastline because it is left up to individual counties. So far, only Brevard and Martin counties have issued mandatory evacuation orders.

“When you look at this storm as it goes along the East Coast, we’re going to have to prepare every county, so it could be the biggest evacuation ever. Every county is focused on it though. We’ve been working on it even before today,” Scott said.

Scott said the state is preparing for the worst and hoping for the best, 1010 WINS’ Steve Kastenbaum reported.

Storm surge watches and warning have been posted from West Palm Beach to just south of Jacksonville.

“I have the hurricane windows and screens around the porches and we will be prepared for it,” Matthew Fowler said.

In Melbourne Beach, near the Kennedy Space Center, Carlos and April Medina moved their paddle board and kayak inside the garage and took pictures off the walls of their home about 500 feet from the coast. They moved the pool furniture inside, turned off the water, disconnected all electrical appliances and emptied their refrigerator.

They then hopped in a truck filled with legal documents, jewelry and a decorative carved shell that had once belonged to April Medina’s great-grandfather and headed west to Orlando, where they planned to ride out the storm with their daughter’s family.

“The way we see it, if it maintains its current path, we get tropical storm-strength winds. If it makes a little shift to the left, it could be a Category 2 or 3 and I don’t want to be anywhere near it,” Carlos Medina said. “We are just being a little safe, a little bit more cautious.”

About 20 miles away in the town of Cape Canaveral, John Long said Hurricane Matthew is just hype as his neighbors in his RV park packed up and evacuated inland. Even though his 32-foot RV is just feet from the Banana River and a half mile from the beach, he had no plans to leave.

Long, who owns a bike shop and has lived along the Space Coast for 30 years, said he has a generator and enough food and water for himself and his cats to last a week.

“There’s always tremendous buildup and then it’s no stronger than an afternoon thunderstorm,” he said. “I’m not anticipating that much damage.”

In Fort Lauderdale, about 200 miles south, six employees at a seven-bedroom Mediterranean-style mansion packed up for an evacuation fearing any storm surge could flood the property. The homeowners planned to move to another home they own in Palm Beach that’s further from the water. Two Lamborghinis and a Ferrari had been placed inside the garage, but employee Mae White wasn’t sure what they would do with a Rolls Royce, Mustang and other cars still parked in the driveway.

CBS2’s Don Champion reports tourists are also preparing to leave. The LaFrance family is cutting their vacation short and heading back to Canada.

“I think we should get out just in case it’s a Category 4. Everyone is telling us we should start heading home,” Nicole LaFrance said.

The last Category 3 storm or higher to hit the United States was Wilma in October 2005. It made landfall with 120 mph winds in southwest Florida, killing five people as it pushed through the Everglades and into the Fort Lauderdale and Palm Beach area. It caused an estimated $21 billion in damage and left thousands of residents without power for more than a week. It concluded a two-year span when a record eight hurricanes hit the state.

As of 5 p.m. EDT Wednesday, Matthew was centered about 400 miles southeast of West Palm Beach and moving northwest, according to the National Hurricane Center . Hurricane-force winds extended 45 miles from the center.

“When a hurricane is forecast to take a track roughly parallel to a coastline, as Matthew is forecast to do from Florida through South Carolina, it becomes very difficult to specify impacts at any one location,” said National Hurricane Center forecaster Lixion Avila.

Florida can expect as much as 10 inches of rain in some isolated areas.

In South Carolina, Gov. Nikki Haley reversed the lanes of Interstate 26 so that all lanes of traffic were headed west and out of Charleston. It was the first time the lanes had been reversed. Plans to reverse the lanes were put in place after hours-long traffic jams during Hurricane Floyd in 1999.

The governor planned to call for more evacuations on Thursday, which would bring the total to about 500,000 people in the state. Florida urged or ordered about 1.5 million to leave the coast, said Jackie Schutz, spokeswoman for Gov. Rick Scott. Georgia had around 50,000 people told to go.

At Folly Beach, South Carolina, southwest of Charleston, Gaby Trompeter loaded her car at her beachfront home preparing to evacuate to Augusta, Georgia.

Trompeter, a 50-year-old goldsmith who designs and makes jewelry, remembers Hurricane Hugo when she stayed in Savannah, Georgia, in 1989.

A year ago when what has been described as a 1,000-year flood inundated South Carolina there was so much water on the road near her house she couldn’t get out for three days.

“If it brings a lot of rain, more than the storm last year, why would I want to stay?” she said.

On the Georgia coast, 92-year-old Lou Arcangeli saw two of his adult children come to his home on Tybee Island to help prepare and evacuate if necessary.

“It’s serious,” said Arcangeli, who has lived in the Savannah area since 1979, when Hurricane David became the last hurricane to make landfall on Georgia’s 100-mile coast. “I’m going to keep an eye on it and not wait until the last minute. As far as I’m concerned, what’s going to happen is going to happen.”

Farmers in Matthew’s path scrambled to protect their crops. In South Carolina, Jeremy Cannon was harvesting his soybeans a week early after waiting too long before last year’s record rainstorm. He watched his soybeans and cotton crops slowly drown as 20 inches of rain fell, costing him $800,000.

“I don’t want to lose a single soybean this year if I don’t have to,” Cannon said. “The Lord says pray without ceasing. And that’s what I’ve been doing — in the fields, near the barn — just praying all the time. I don’t want to find out what I’ll have to do if I get wiped out for another year.”