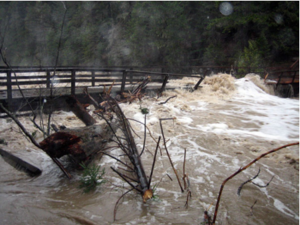 Flooding has killed at least 10 people in Haiti, officials have said.

Rivers burst their banks in the capital Port-au-Prince after torrential rain. Several people are reported missing.

Displaced people living in a tent city for victims of the January earthquake are strengthening their makeshift homes to cope with the rain.

Two bodies have been found in Fontmara, the site of one large camp sheltering some of the 1.5 million people made homeless by the disaster, which left more than 250,000 people dead.

Aid groups and officials overseeing the reconstruction had been on guard for heavy rains during the hurricane season. Canals were cleared and drainage ditches dug around some camps, the Associated Press reports.