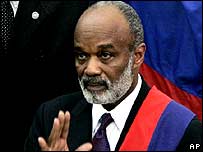 The gloves are off.

Preval has held a secret meeting with 30 major Haitian businessmen.

He told them that there would be no presidential elections this coming November 28. Instead he will hold elections for the Senate and Chamber of Deputies. Via his control of the CEP – Electoral Council – he will have total control of both the Senate and Chamber of Deputies.  Preval said…”I will control Parliament and then I will hold presidential elections. My man will win and he will do what you want.”

He promised to wipe out all other candidates and run some controlled opposition to give the election a valid appearance.

This criminal association, with the Haitian business community, should come as no surprise.

Camille Leblanc, President of AIMER HAITI, a movement to save the nation, gave a devastating interview in which he named names of those attending the secret meeting with Preval. Leading this criminal sssociation, planning to act against the best interests of Haiti, and the international community, were well known figures including Moscoso, Vorbe, Braun and Bonnefil and Mevs.

Of course, Braun and Moscoso control the two major banks in Haiti, SOGEBEL and UNIBANK. It has often been said that UNIBANK and Braun were the main beneficiaries of Preval’s largesse. The fact that Dimitri Vorbe is one of the Preval insiders is also a well known fact.

Forensic audits, of these two organizations, would be in order before the international banking groups entrust the billions set down for Haiti’s reconstruction…to these institutions. SOGEBANK has had a number of scandals over the past months.

Luckily for Haiti, someone attending the meeting revealed the plot.

It is time for the American government to take a serious look at the game and revoke the visas of each and every businessman who plots to derail the democratic process for his own personal gain.

The International Community is funding the electoral process and must demand the creation of a new CEP – Provisional Electoral Council.

Preval must step down.

The offending businessmen must be sanctioned. They, their family members, and their associates must be barred from benefitting from the massive investments coming out of the earthquake reconstruction programs.

He time for pussy-footing is over. The time  for action is here. A new CEP is a must. Preval’s resignation is a must.

Preval’s criminal cabal must be prosecuted for their many, many crimes over the term of Preval’s presidency.

There can be no immunity!!!