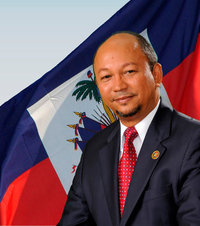 As Rahm Emmanuel leaves the service of President Obama, he is presented with a dead fish, wrapped in newspaper.

This is an old Mafia message.

In Haiti, where no one can spare a fish, other ,methods of communicating displeasure are used. Preval-controlled gang-members are often utilized to generate insecurity, create fear, or force people to abandon inconvenient projects. Preval would like to see Leslie Voltaire drop out of the presidential campaign.

And now, the husband of Leslie Voltaire’s long time maid has been shot and killed.

No dead fish, wrapped in a newspaper.

But then, this is Haiti and a message has been sent.