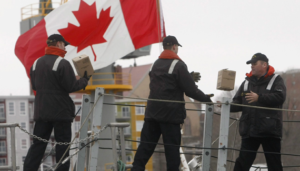 The Canadians had chosen Jacmel as the focus of their relief efforts. They organized everything in Jacmel…electricity, business …started to build roads. Because they are using good, honest people from the population, Jacmel’s Cartel – headed by Zenny, Senator Lambert and others are uncomfortable. These same people were major supporters of the Preval Presidential Election efforts. Mayor Zenny hosted Preval, and UN advisers, during the campaign and Zenny donated $1,600,000 to Preval’s campaign.

You have a situation in Jacmel where the Canadians involved in restoration of the area have been threatened by Mayor Zenny and Senator Lambert, plus other members of the cartel.

If the Canadians are successful in their efforts to help Jacmel…the Cartel members will not be re-elected.

The Canadians asked the UN for help and are awaiting a reply.

May pull out soon, if comments are to be believed.

One must understand the significance of the Jacmel situation. One of the Zenny family members married the daughter of CAM founder, creating a massive network for the laundering of drug money for the Jacmel Cartel.

This group controls most of the food imports into Haiti from the Dominican Republic. One twitch from them and the food supply could be cut off. They are the Caribbean Market… where people died while guards kept rescuers away… DEA, MUNUSTAH and PNH sources say there was a secret chamber, underneath the building, where a cache of cocaine and cash was buried. They kept rescuers away until this could be retrieved. People died as a result. One Haitian lawyer, and his family were trapped for four days. They maintained cell phone communication, begging for rescue. This rescue was blocked for days, by the Caribbean Market people.

SHOWS WHAT POWER THEY HAVE WITH PREVAL’S GOVERNMENT. AMERICANS WERE TRAPPED HERE.

Senator Lambert  may be a major cocaine trafficker, but he is not a fool. Lambert realizes that he, Zenny and the rest of his associates will be toast if Preval falls. The drug community backed Preval’s presidential candidacy because they knew the alternative candidates would try to put an end to the cocaine business.

One must wonder at the Americans’ motivations here. How on earth could they release Faurel Celistin, with his fortune intact, after his depredations. He is now back in business and those who helped with his original arrest must now live in fear.