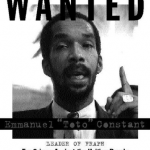 Records recently uncovered, supported by an interview with jailed FRAPH leader Toto Constant,  reveal important ties between Jude Celestin and Colonel Michel Francois and Toto Constant, during the 1991-1994 Embargo period.  Celestin was one of the go-betweens that linked Francois with Emmanuel “Toto” Constant, leader of the paramilitary death squad that attacked Aristide and Preval’s Lavalas associates. Celestin was a major “Attache” serving directly with Francois.

These facts are known to the State Department and American Embassy.

Only in Haiti would you find a mortal enemy of the Aristide/Preval/Lavalas team standing as Rene Preval’s personal candidate for the presidency.

We will publish a photograph of Jude Celestin, Michel Francois and Toto Constant as soon as it is forwarded from Washington.