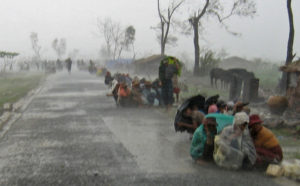 Moderate rain falling on Port-au-Prince soaking homeless people in their primitive shelters. Many of these are made with bedsheets. Some are made of cardboard. Thousands have no shelter at all and sleep on the ground or streets, that have been closed to traffic.
Huge outbreak of colds, flu……pneumonia can follow.
Expecting increase in TB.
Already numbers of Tetanus cases being reported. No Tetanus hemoglobin available in Haiti.

Plans made for destruction and removal of damaged houses so rebuilding can start. Quiety, so quietly…Preval has effectively derailed these operations and the entire rebuilding project has been placed in limbo. This is one of Preval’s efforts to embarass the International Community in general and the United States in particular.

The worst is yet to come as wounds become infected and more limbs must be amputated.

And the American Ambassador says all of this is a showcase for emergency operations!!