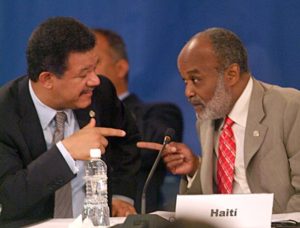 President Rene Preval’s official convoy has been blocked at Cap Haitian as Preval was en route to Ouanaminthe, in NE Haiti,  for the opening ceremony  of a new university. He was to take part in the ceremony with Dominican President Fernandez, who is now standing, waiting for the Haitian leader.

The Haitian people have never liked Preval and expected him to bring Aristide back, since that was the promise he gave Lavalas, for their support in 2006. He has betrayed them, and now betrays the nation in its time of need. The January 12 earthquake has devastated the nation and Preval now blocks all efforts to meet the challenges.

This demonstration is also a message to President Fernandez who is working to install Prime Minister Bellerive as Haiti’s next president. Bellerive has been an active member of the Dominican Republic’s Secret Service for at least 20 years.

President Fernandez should keep his fingers out of Haitian affairs!!

MINUSTAH had to send a helicopter to rescue Preval

PROLOGUE
Preval was surrounded by a mob throwing rocks, rotten vegetables and bags of shit…..which made a mess of his car.
MINUSTAH dispatched a helicopter and some troops to extract Preval from this embarrassing situation.

The Haitian people hate Preval and he remains in power only because of MINUSTAH. In fact, it must be remembered that he was given the presidency by the Brazilian/Chilean members of MINUSTAH in 2006 when they took his 23% of the vote and unconstitutionally expanded this to 51% in order to avoid a run-off.

Time for Preval to go.

We need a new CEP, Electoral Council, and a fair election. None of this can happen with Preval in power.