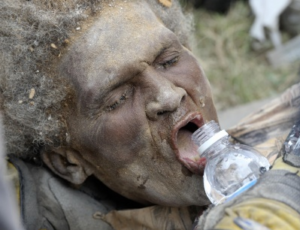 Just when everyone thought that Preval’s criminal daring ways – urged on and focused by his camp-follower Elisabeth Delatour-Preval – had reached its limits, with his recent theft of the $90,000,000 Venezuelan dollars that was targeted for Gonaives rebuilding, and his earlier theft of $198,000,000 from Petro Caraibe accounts… another outrage appears.  This one is even bigger, and has more far-reaching effects.

Preval will now slow/block all humanitarian aid material in customs on the premise that some commercial businesses have brought non-humanitarian items in – avoiding duty.  So, for some insignificant avoidance of taxes/duties (what’s new??!!) Preval will block humanitarian assistance for all of the people left homeless, plus the tens of thousands of injured…victims of the January 12 QUAKE.

The massive volume of supplies will be delayed in Customs….for a future – miraculous release – in time for his political party’s UNITE – candidates to use the supplies to buy support from the voters.

Thousands will die because of this cold and heartless criminal concept.

Donor nations, frustrated by the delays, will discontinue their support of the Haitian rebuilding project. Like a patient, staring an antibiotic treatment…then stopping halfway through…Haiti will die a final and complete death.

Now is the time for the International Community to remove the infection – Preval/Delatour – from the Haitian body so a cure to its massive illness can be completed.  Unless the poisonous, infected flesh is cut away – the body must die.