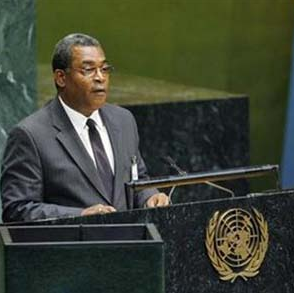 Prime Minister Bellerive has just made a statement to the effect that “There will be no reconstruction of Haiti until his functionaries have been paid back wages…” After he and Preval have already stolen the cash that was directed for payment of these obligations.

The situation is a simple one.

President Preval and Prime Minister Bellerive have stolen all earlier funding for their own bank accounts, those of their associates, or retention in a huge fund for election costs guaranteed to see their political party UNITE win the Presidency and the Parliament.

This is like some guy who runs a Texaco service station. At the end of each day he takes all of the cash from the register, and expects Texaco to replenish it for business opening the next day.

Why does the World Community bow to these obscene pressures??

Preval and Bellerive do not give a damn for Haiti’s poor majority!

There can be no realistic attempt to salvage the Nation with this pair of bandits in control.

They must step down – and face justice.

A new CEP – Electoral Council – must be created and planning for elections initiated immediately.

And RECONSTRUCTION MUST START NOW!!!

THE PEOPLE CANNOT BE HELD TO RANSOM WHILE BELLERIVE/PREVAL ATTEMPT TO BLACKMAIL THE WORLD!!