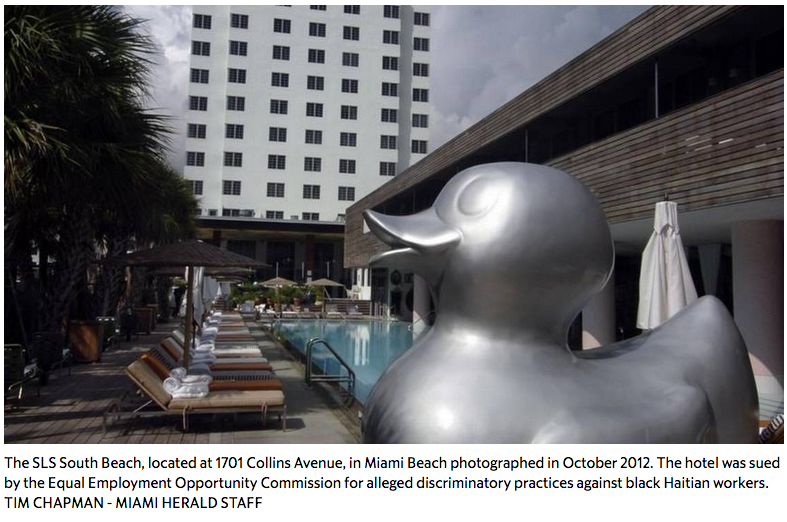 Four years ago, something bitter was brewing in the kitchens of the ritzy SLS South Beach hotel.

Seventeen of the Haitian dishwashers employed at the hotel’s restaurants, which included The Bazaar by Jose Andrés, Katsuya, and Hyde Beach, were banned from speaking Creole, while Hispanic colleagues were free to chat in Spanish, according to a discrimination lawsuit filed by the Equal Employment Opportunity Commission. The Haitian workers were also asked to lug heavy items up the hotel’s 13 floors by stairs while other workers were spared.

When the Haitian workers asked managers to fix the hotel’s broken service elevator, one boss stated, “Let those slaves do the work.” The dishwashers reported the alleged abuse to human resources in April 2014. The entire dishwashing staff was then fired and replaced the same day with a staff “made up of almost entirely of white and/or Hispanic workers,” according to the lawsuit.

On Friday night, the hotel agreed to pay $2.5 million to the 17 people who were fired. It was a settlement to the suit that was filed in April 2017 by the federal employment agency.

“We advocated for a settlement of this kind because we thought it was necessary to compensate them for what they endured,” EEOC regional attorney Robert Weisberg said Monday, noting the “severe emotional distress” the discrimination had on the workers.

James Greeley, chief legal officer of the hotel’s parent company sbe, told the Miami Herald on Monday that the decision to outsource the dishwashing department had a “perfectly legitimate business motive” and noted that not all the workers in the department were of Haitian descent.

He says the hotel continues to employ Haitian workers in “customer-facing positions” and called the premise of the suit “illogical.”

“We’re an inclusive company which employs people of over 60 nationalities,” he said.

Celebrity chef José Andrés, an outspoken advocate for immigrants and the owner of one of the resturants located within SLS South Beach, made headlineslast February when he removed his white chef coat at South Beach Wine & Food Festival’s black tie dinner to reveal a t-shirt with the words “I am an immigrant.” In 2015, Andrés abandoned plans to open a restaurant in Washington D.C.’s Trump International Hotel after the president’s characterization of Mexican immigrants as rapists and murderers.

As part of the settlement, the hotel will be required to run mandatory anti-discrimination training for all chefs, sous-chefs, managers, and hourly employees who work at the hotel’s restaurants, according to Carmen Manrara Cartaya, a trial attorney for the EEOC. These trainings are “designed to prevent what happened to those Haitian workers to happen to anyone else again,” Weisberg said.

Though the fired dishwashers worked solely at the SLS South Beach hotel, 1701 Collins Ave., Weisberg said the agency’s investigation found “that decision-making was coming out of the corporate headquarters.” Six of sbe’s Miami-based hotels will be required to offer the training.

The SLS South Beach will also maintain a compliance monitor to keep track of the names and national origins of all employees hired and fired at the hotel.

In the settlement, the SLS South Beach denied all accusations but maintained “that settlements are favored over continued, costly and uncertain litigation.”

Greeley said the company “made the decision to settle this in an amicable way for the benefit of our former employees.”

“At the end of the day these were our employees,” he said. “These are not adversaries.”