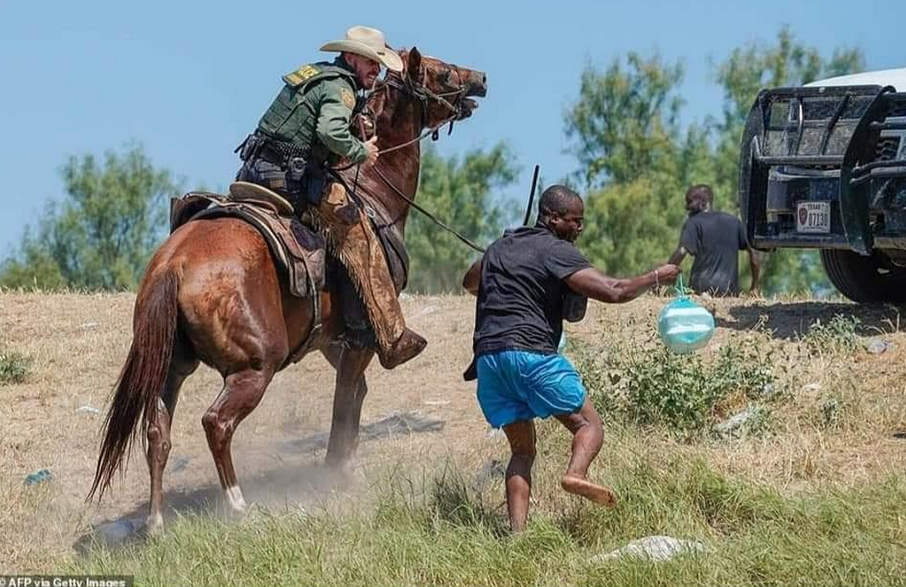 DEL RIO, Texas — Yellow police tape is all there is holding back a small city’s worth of migrants from escaping the underbelly of an international bridge where they have camped out for days and become increasingly on edge.

Over the past five days, the grassy city land under the Del Rio-Acuna International Bridge has turned into a massive campsite for migrants who cross the Rio Grande River and wait for the Border Patrol to take them into custody. While Border Patrol agents are used to large numbers of noncitizens crossing, many said they have never seen anything like this.

Migrants who came across the border, before Texas troopers rolled up in full force on Saturday, weaved their way through the massive campsite and picked out their own dwelling spot, where they could expect to sleep and live for several days before being taken into custody.

Just a handful of federal agents were on-site below the bridge on Thursday, the day 4,000 people streamed across. Rather than running past the agents, the migrants, who are primarily from Haiti, waited at the bridge under the presumption that they would be detained then released into the United States with legal documents permitting them to remain here.

Some people began hand-cutting tall wild plants a few hundred feet in either direction then building tent-like shelters with the branches. Now, hundreds of plant-made huts dot the east and west sides of the bridge.

“You turn the corner, and then you start to see up here, right, this sea of people just going in two directions,” said Jon Anfinsen, the National Border Patrol Council’s president of the Del Rio region. “You walk through here, and it really feels like another country.”

Clothing drapes the handmade tents and portable toilet tops, as do blankets and sheets that were brought over from Mexico. Backpacks and luggage are stacked up all over the place. Garbage piles stretch five, six, seven feet into the air, but the worst smell comes from the dozens of portable toilets on the west side of the camp.

The 70 toilets are merely feet away from the only fresh water, brought in in large barrels because there is no water on site. Twenty feet away, a woman is wiping a young girl with a wet rag in an attempt to clean her. Others have bathed in the river.

“We’re seeing people passing out with some diabetic issues. We’ve had people with heated-related issues. A bunch of women have gone into labor,” Anfinsen said. “Aside from just some of those issues we’re expecting are going to be some communicable diseases that will start to spread from there just because, of course, it happened just because it’s not sanitary for anybody.”

There are no electric outlets, making communication impossible. There are no fans or air conditioners, and Monday was another 100-plus degree late summer day.

“This is terrible,” said Anfinsen. “You hear children crying in there. It’s just because this is not a place for kids. It’s not a place for anyone. This is just — it’s a terrible situation.”

Migrants arriving on site last week could walk over to the north end of the impromptu camp and get on a list to get taken into custody. The Border Patrol is not tracking who is there by name or nationality. They instead rely on a number of papers that contain numbers to the corresponding carnival-like ticket that each person is given upon arriving on site.

Randomly throughout the day, an agent will call 50 ticket numbers. The ticket-holders can board a white coach bus to a federal processing facility.

Brandon Judd, president of the National Border Patrol Council, said it was a “rudimentary” process and indicative of the government’s poor handling of the situation and letting it get to this point.

The growing concern among law enforcement is how to adequately feed and hydrate everyone since the food and water supply migrants had relied on by crossing back and forth to Mexico was cut off this weekend. As of Monday, 12,000 people remain in the camp as Border Patrol struggles to move people out.