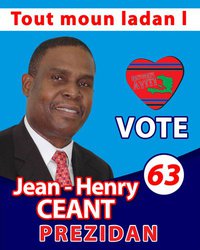 President Rene Preval, and his supporters, have busied themselves with a number of false polls, showing Mirlande Manigat as a front-runner in the electoral campaign. In actual fact, Manigat, like her husband before her, has popularity is single percentile digits. Preval is playing a game that could see him – and his CEP – fix the vote to have a Manigat/Baker run-off in which Manigat wins.

Preval’s man, Celestin, would poll a few percentage points, allowing Preval to claim the election was a fair one. He will then control parliament, the cabinet and Manigat after the election.

The true poll shows Jean-Henry Ceant with somewhere between 45 and 50 percent, over the past 4 weeks.

Because of this reality, Preval, and people like Senator Lambert, who will surely face justice with a free and fair election, will go the limit to stop the process, or kill the opposition.

Do not be surprised if there is violence.

Preval has nothing to lose, at this point in time – EXCEPT EVERYTHING!!!

1 thought on “FEARS OF VIOLENCE AS CEANT PLANS MASSIVE 100,000 RALLY IN TABARRE ON FRIDAY”