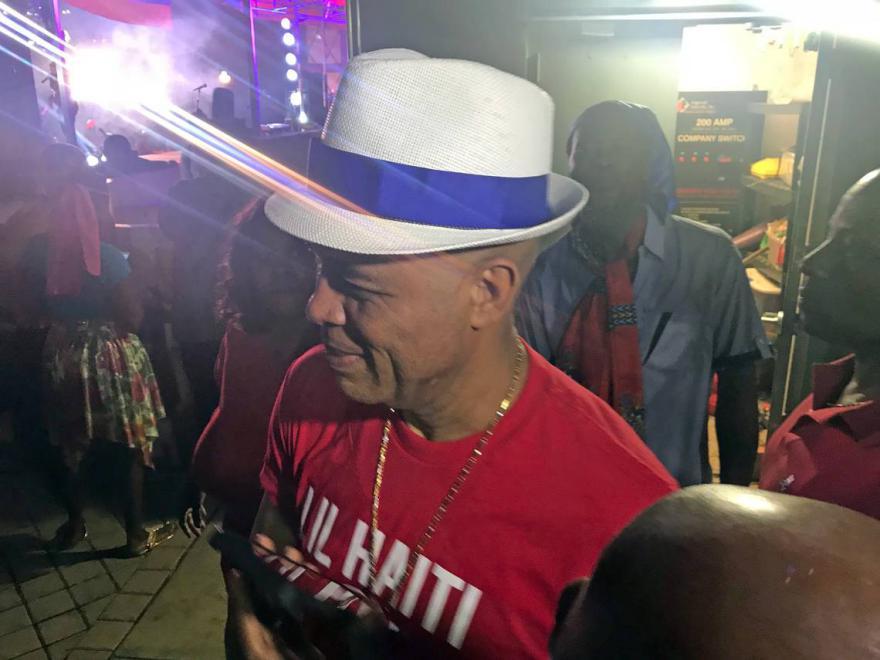 A protest against former Haitian President Michel Martelly failed to deter fans Friday night who streamed into a free concert at the Little Haiti Cultural Complex in Miami to celebrate the founding of Haiti’s flag.

“They can protest. It’s a democracy,” said Chavannes Ade, an electrical engineer from Pembroke Pines. “We’re here to have fun. We’re here for Micky. He is one of the best Haitian entertainers. He’s the whole package. It’s either you take him or you don’t.”

As he spoke, the small crowd of protesters across the street called for Martelly’s arrest, accusing him of stealing funds from Petrocaribe, Venezuela’s diminished oil program. A Senate commission has accused several of Martelly’s ex-ministers of stealing $2 billion from the fund, and two Haitian investigative judges are looking into the allegations.

Martelly, who goes by the stage name “Sweet Micky,” had been invited as Little Haiti’s monthly Sounds of Little Haiti Haitian Flag Day’s star attraction. The move led some Haitian rights activists to denounce the invitation in an open letter to Miami Mayor Francis X. Suarez and the City Commission.

Outraged, they accused Sweet Micky of being “a bitter criminal” who denigrates women and “brought disrepute to the office of president and inflicted lasting harm to the dignity of Haitians in Haiti and in Miami.”

“These people they are part of the past. They are business people …. They don’t represent Haiti anymore,” Martelly told the Miami Herald as he made his way to the stage. “The Haitian people have been betrayed. … That’s exactly why the protests don’t work because they do it in the radio. There is a new generation of Haitians.”

One of the protestors, Simon Simonville, 66, held an upside down flag. “This is Haiti today, upside down,” he said. “This is what Michel Martelly and (President) Jovenel Moise have done to the country, a beautiful country.”

Simonville was among the 20 activists who had initially gathered in front of the Caribbean Marketplace adjacent to the Cultural Complex before being told by police they had to go across the street. 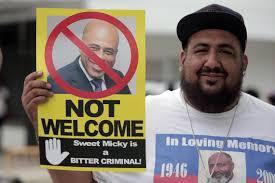 Several wore T-shirts emblazoned with the image of the late Father Gerard Jean-Juste, a maverick priest who fought for Haitians in the United States and in Haiti.

Jean-Juste “would be turning over in his grave to see someone with the moral and political stance of Sweet Micky at the top of flag day celebrations,” activist Jack Lieberman said. “It’s a sad day. Young people need to know their history and know that Sweet Micky helped destroy Haiti.”

Earlier, Lieberman passed out fliers while others waved posters. One had a circle around Martelly’s face with a line drawn through it . Another poster was of Moise and convicted Haitian drug trafficker Guy Philippe. 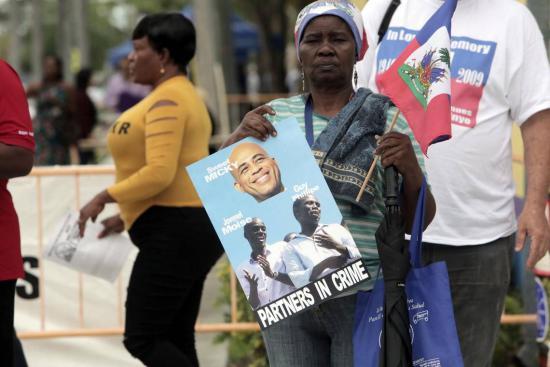 Though they had a permit, protesters were blocked from entering the area where Martelly was to perform by barricades that had been set up to control the crowd. Inside the barricades, the crowd anxiously awaited Martelly, who had been scheduled to do a 3:30 p.m. sound check followed by a press conference. Neither happened. He wasn’t scheduled to hit the stage until 9 pm, an hour after the protest was supposed to end.

Asked about the lack of response to their efforts, symbolized by the gathering crowd. Simonville said: “Perhaps they want to see a former president wear a thong while dancing on stage,” a reference to one of Sweet Micky’s acts before Martelly’s 2010 presidential run.

But those expecting an outrageous and foul-mouth carnival singer did not find that Friday night. Martelly’s crowd-pleasing performance was relatively cleaned with him preferring to sing some of his early hits, rather than his recent carnival tunes that created an uproar among critics due to the sexually suggested lyrics. He did, however, respond to protesters with two expletives from the stage. 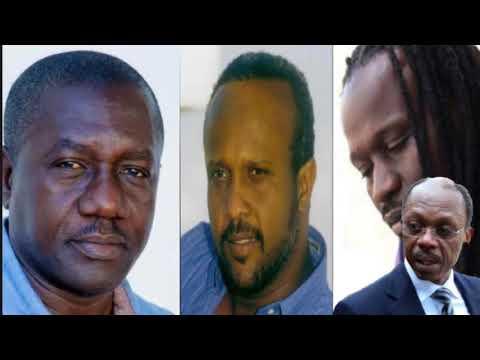 Give us a break!!

Father Gerard Jean-Just had to remain in Haiti, for several years, hiding from an arrest warrant for rape of a 12 year old girl.

He would later be involved with the kidnap and murder of journalist Jacques Roche. After Roche’s kidnap, Father Jean-Juste flew to Miami for an alibi. Unfortunately, for him, his phone call, ordering Jacques Roche’s murder was intercepted.

In spite of the fact Jacques Roche’s m Jean juste to stay away from the funeral, he arrived in full ceremonial robes and postured so as o be detained by police.

Jean Juste was a part of what still exists, Aristide’s effort to destabilize any government in power. 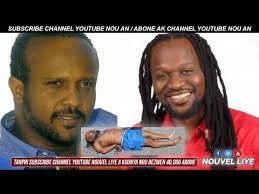 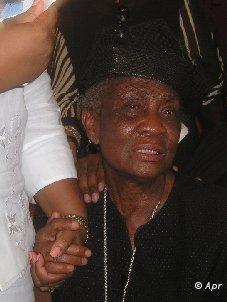 This guy was an opportunist, like Aristide, who used his priest’s robes as camouflage for massive crimes against the people.
Two dogs, three cats and a couple of Haitians demonstrating against Martelly  means nothing.
The thousand, plus that attended his show tell it all.