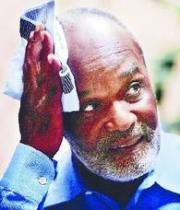 All civilian flights from the United States to Haiti were halted Thursday at the request of the Haitian government because there is no room at the earthquake damaged Port-au-Prince airport for more planes and no fuel to spare for departing aircraft.
The Federal Aviation Administration ordered the “ground stop” on flights Thursday morning after the Haitian government said it would not accept more flights into Haitian airspace, said a U.S. official who wasn’t authorized to speak publicly and asked not to be named.
At the time, there were 11 flights circling the heavily damaged airport, but no more ramp room to store planes once they had landed, the official said.
There was also very limited jet fuel available for planes leaving Haiti, the official said.
The air traffic control tower at Toussaint L’Ouverture International Airport was destroyed in Tuesday’s earthquake.

8 thoughts on “FAA halts air traffic to Haiti, no room for planes- Estimated 100,000 killed- many less than previously thought”