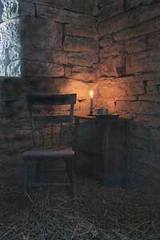 Duperval was found guilty of money laundering offenses by a U.S. jury in March, one of eight people convicted so far in a massive case brought by the Justice Department under the Foreign Corrupt Practices Act. One former U.S. telecommunications executive, Joel Esquenazi, received a 15-year sentence, the longest ever imposed under that anti-corruption law, federal prosecutors said.

Assistant U.S. Attorney James Koukios said Duperval’s crimes were notable because he came from a prominent Haitian family with access to wealth and advantage. He was appointed to the Haiti Teleco position in 2003 by former President Jean-Bertrand Aristide.

“This is a person who didn’t have to steal. He didn’t have to take that money. But he did,” Koukios said. “That was money for the people of Haiti. It wasn’t for Mr. Duperval.”

Trial evidence showed the payments were intended to give certain U.S. telecommunications companies favorable rates and contracts with Haiti Teleco. One of Duperval’s predecessors as Haiti Teleco international relations director, Robert Antoine, was sentenced to four years in prison after pleading guilty and admitting he received more than $1 million in similar bribes.

Testifying in his defense, Duperval insisted the payments through shell companies he controlled from Miami-based Cinergy Telecommunications and Terra Telecommunications were not bribes but only “tokens of appreciation” for doing his job well. Martinez called that testimony “ludicrous” before finding Duperval had committed perjury on the witness stand, grounds for adding to his sentence.

Duperval, who used the bribe money for personal expenses such as mortgage payments and children’s education costs, also was ordered to forfeit more than $433,000 in assets. He did not speak at Monday’s hearing but his wife, Ingrid Duperval, asked for mercy. Duperval, has three children and a home in Miramar, Fla.

“He is the best father, the best son, the best husband, any woman could dream to have,” she said.

The Haitian corruption case is far from over and recently has been shadowed by violence.

A former Haiti Teleco director general, Patrick Joseph, pleaded guilty in February to a money laundering conspiracy charge and agreed to testify about sharing bribery payments with other senior Haitian officials. The former president, Aristide, has not been charged in the case.

Shortly after word spread about Joseph’s plea deal, unidentified gunmen on motorcycles fatally shot his father, Venel Joseph, at the wheel of his car on a Port-au-Prince street. That slaying remains unsolved.

Joseph was director of Haiti’s Central Bank during Aristide’s second term from 2001 to 2004, when he was forced out of office. Aristide afterwards lived in exile in Africa until returning in 2011 to Haiti.