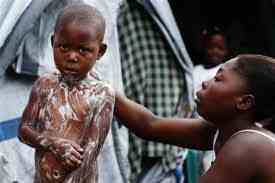 Haitians living in squalid camps on public land are being evicted ahead of the upcoming hurricane season and more than a week into the new president’s term.

“This is the work of animals,’’ resident Guerin Pierre said, standing amid donated plastic sheeting, plywood and clothing strewn across the gravel yard. “This is the worst kind of humiliation someone can experience. They chose to do this at the start of the hurricane season. This is abuse.’’

The destruction of about 200 makeshift tents in the Delmas 3 neighborhood was the latest in a string of evictions across this earthquake-ravaged capital where victims of the hemisphere’s worst natural disaster are being forced off public and private property with little or no warning. The forced evictions come just days ahead of Wednesday’s start of the Atlantic hurricane season and just two weeks into the term of President Michel Martelly.

The evictions have triggered outrage by those displaced, some of whom say they have no place to go, and from U.S. Rep. Frederica Wilson, D-Miami, and others in Congress, who called the removals “disturbing.’’

“During President Martelly’s visit to the United States, we were all encouraged by his assertion that Haiti will face a new day — a new beginning. We extended, and continue to extend, our arms to assist and support the people of Haiti and its government as it transitions upward,’’ the Congress members said in a statement. “We will not, however, idly stand by and hear such reports of evictions, without seeking an explanation or taking action.’’

Figures from the International Organization for Migration show that almost one in four camp dwellers are living under the threat of evictions. Many are questioning the timing of the removals. Many are asking if it is a sign of things to come from Martelly, who had made relocating the estimated 688,000 still living in tent camps a top priority during the presidential campaign. He promised to provide houses and address land titling issues.

“For a year and six months, they never did anything. Why now? It’s not logical, ’’ said Kenson Georges, 36, who accused Martelly of sanctioning the evictions even though they are being carried out by city of Delmas Mayor Wilson Jeudy.

On Thursday, Martelly sought to distance himself from the evictions, saying while he has prioritized the closing of six camps as part of his 100-day plan, evicting people without notice is not part of his strategy. He said he asked Jeudy about the evictions and the mayor said that bandits are using the camps for criminal activity. At a camp that Jeudy first targeted, bandits had opened fire on residents, killing four people, Martelly said.

“The people are victims every day,’’ Martelly said.

On the campaign trail, Martelly spoke often about Haiti’s tent cities, which mushroomed after the quake left an estimated 1.5 million people homeless and more than 300,000 dead. After his victory, advisors put together a camp strategy.

Foreign diplomats and humanitarian aid workers have criticized the plan, however, saying it focuses more on aesthetics rather than a long-term solution that includes either permanent or decent temporary housing. The plan also lacks clarity on where the people will be relocated, and it does not, for example, address more problematic camps such as Jean-Marie Vincent where 52,000 people live in squalid conditions on an old airstrip near the international airport.

Rapes and armed robberies — often occurring during the day — are an almost everyday occurrence, several camp leaders and residents told The Miami Herald.

“It is not about emptying camps; it is about providing alternatives,’’ said Nigel Fisher, the United Nations’ humanitarian coordinator for Haiti.

Fisher said humanitarian agencies are encouraging Martelly’s team to devise a plan that focuses on the neighborhoods from where the displaced hailed and what it would take to encourage them to return home, whether money for rent, repairs or jobs. Meanwhile, the U.N. mission in Haiti has said it is investigating the forced evictions on grounds that they violate international humanitarian law and human rights.

Jeudy, who unsuccessfully ran for the presidency, said on Haitian radio this week that the camps have become a public nuisance. He said many tent residents have homes but prefer to live in a camp in hopes of receiving free aid, including a house. Some have “several tents” in various camps, and are running criminal outfits, leading to rapes and robberies, he said. Pressed for statistics to back up his claims, Jeudy had none. But growing impatience with the camps is common here.

But residents in the Delmas 3 neighborhood said they deserved at least 24 hours notice, which did not come when the mayor arrived along with scores of Haitian National Police officers and security agents at 6 a.m. Wednesday.

“What they are doing is not helping poor people,’’ resident Jean-Louisguens Rameau said. “But we have no voice, no means to buy justice. We need the government to take its responsibility.’’