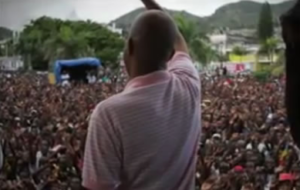 The Aristide/Lavalas groupings have planned a nationwide attack on the Democratic Process tomorrow. Their goals is the destruction of Michel Martelly’s government, an all it has managed to accomplish. There have been mistakes, but the Martelly/Lamothe government was the best since 1986.

The ill-conceived removal of Laurent Lamothe, Haiti’s popular Prime Minister, still leaves some wondering what happened, and why it happened.

The Aristide/Lavalas cabal was swift to take advantage of this moment in time, moving to create instability and chaos.

Their goal is a simple one: Collapse the Martelly government and Place Senate President, and cocaine dealer, Desras on the throne as a Provisional President. A complete Aristide/Lavalas take-over will follow.

Recognizing this threat, President Martelly has gathered those who hope for Haiti’s survival and the survival of our embryonic Democracy.

Martelly will place a cross section of his suppporyrs, and some opponents, on the streets tomorrow – to block the Aristide/Lavalas outrage.

We wish President Martelly, and those who will participate, the best of luck.

The world is watching!

2 thoughts on “ENOUGH IS ENOUGH!!! MARTELLY & SOCIETY TO MOVE AGAINST THE FEW WHO WOULD CREATE CHAOS & DISRUPT DEMOCRACY”