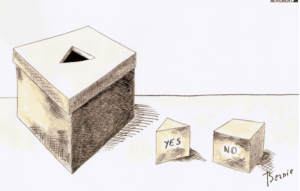 President Martelly says one thing and does another, guaranteeing that elections will not be held in 2013.

The Nation requires some sort of structure within which to coordinate the electoral process. Key in this structure is the CEP. Unfortunately, this organization, under the leadership (really not the word) of Emmanuel Menard is a ship without a rudder. This person has done little or nothing to guarantee any sort of chance for an election in 2013…. Or 2014, for that matter.

Some time ago he effectively rendered CEP offices unusable by initiating a massive unnecessary renovation project. First move was to tear up the very expensive ceramic tiles, already in place from its days as GOLD GYM.  Valerie Milfort’s husband has the renovation project and it is rumoured that Menard will receive $50,000 from the money he pays Milfort. It seems as though he has already cut a check in excess of $250,000.00 for renovations.

While quick to pay the husband of Sophia’s clone, Valerie Milfort, previously considered as a replacement for Laurent Lamothe, Menard has left the CEP staff without pay for something over four months. This is no problem for Menard since he is still receiving his checks from other government employment including one from  TNH.

And we have Leopold Berlanger making noises about the need for elections. Those inside the walls suggest he has already been paid to accept the fact elections will not be held in 2013.

Finance Minister Laleau is controlled by Martelly so Prime Minister Lamothe is frozen in his effort to produce an effective electoral process in 2013.  If Laleau doesn’t pay wages, you don’t have any sort of morale within the organization.  There is presently $1,500,000 available for operating expenses, so there is no excuse for wages not being paid.Menard’s management style sees people without direction as he sits in his office, telling stories and drinking expensive Scotch.

We predict that Menard will resign sometime before

November, leaving the elections effectively derailed as another team is put together.

Even as all of this is happening, or not happening, Prime Minister Laurent Lamothe continues in his effort to hold elections in 2013. He presented the Electoral and it will go to our Parliament on Thursday.

Prime Minister Lamothe is determined to have elections in 2013, as promised.

There is an old Creole proverb that says something like : “If you wish to complete the journey, one must not abuse his horse,,,”

Time to give the horse some food, and a little water.

Time  for Martelly to pay the CEP staff that has gone without money for four months.

Like pregnancy, there are certain time restraints that apply. It takes 9 months to get pregnant and have a baby.

In Haiti our experts claim that a minimum of 6 months are required in which to create a proper election. Anything less and we have another abortive ballot – but what’s new.

AUGUST, SEPTEMBER, OCTOBER, NOVEMBER, DECEMBER, JANUARY = 6.  WE ARE ALREADY IN TROUBLE, EVEN WITH A REAL CEP.

Prime Minister Lamothe has forced the pace in a real effort to give Haitians the election.

IT CAN BE DONE BUT PRIME MINISTER LAMOTHE NEEDS THE HELP OF ALL HAITIAN SOCIETY TO MAKE THIS CONCEPT WORK.