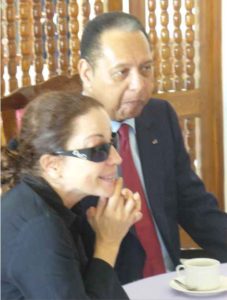 Jean-Claude `Baby Doc’ Duvalier apologized to his countrymen Friday as the U.S. stepped up pressure on the Haitian government to accept an OAS report.
BY JACQUELINE CHARLES AND TRENTON DANIEL
jcharles@MiamiHerald.com

“Not for himself,” attorney Ed Marger said after Duvalier spoke publicly for the first time since abruptly returning to Haiti. “What he would like to do with the funds in Switzerland is to contribute that to the rebuilding of the country. And that is one of the reasons why he came back.”

Duvalier did not address the Swiss funds in his prepared statement, in which he said that he returned after 25 years in exile to mark the first anniversary of the devastating earthquake.

“When I made the decision to come back to Haiti to commemorate this sad anniversary with you, in our country, I was ready for any kind of persecution,” he said. “But I believe that the desire to participate by your side in this collaboration for the national reconstruction far outweighs any harassment I could face.”

The statement came on the day the United States revoked visas of some Haitian officials, hoping to increase pressure on the government to resolve a political crisis stemming from November’s disputed elections. Some feared the impasse would deepen with Duvalier’s return.

“Our focus at the present time is in ensuring a free, fair and credible election process in Haiti,” State Department spokesman P.J. Crowley said.

Since Duvalier’s Sunday arrival, prosecutors have charged the former dictator with embezzlement and corruption; others followed by filing human rights abuse complaints against him.

Duvalier, 59, made the trip just before a Swiss law that could entitle him to at least $4.6 million takes effect on Feb. 1. To collect the funds, he would have to show Haitian authorities aren’t interested in prosecuting him.

Duvalier’s comments fell short of an outright apology to those who endured his brutal and allegedly corrupt rule from 1971 to 1986, when a popular uprising forced him to flee.

“I also take this opportunity to express once more my deep sadness at the place of my countrymen . . . who have suffered under my government,” said Duvalier, sometimes slurring his words.

He said he came to commemorate the victims of the devastating earthquake and “show solidarity” with his fellow Haitians.

He was accompanied by several consultants, including Bob Barr, a former U.S. congressman who ran for president on the Libertarian ticket.

Duvalier’s sudden return threw the country into confusion amid election officials’ struggle to sort out results from the Nov. 28 vote.

The Organization of American States has urged Haitian officials to accept a report drafted by a team of its election experts showing that third-place finisher Michel “Sweet Micky” Martelly, not ruling party candidate Jude Célestin, should advance to a runoff with ex-first lady Mirlande Manigat.

The findings ran counter to preliminary results showing Célestin and Manigat won spots in the second round and that Martelly finished third — a move that unleashed two days of unrest.

Martelly on Friday called on the Provisional Electoral Council to accept the OAS report, saying he was the victim of a plot orchestrated by the ruling party and electoral commission. Martelly and another opposition candidate presented their cases in a hearing that began Friday and resumes Monday.

The Haitian government has called the OAS findings flawed, and election officials have said they are not bound by the OAS recommendations. A runoff scheduled for Jan. 16 was postponed, and no new date has been set.

The U.S. decision to revoke the visas signals its growing frustration with the Haitian government. According to Haitian radio, government officials and powerful allies saw their visas yanked.

Crowley declined to elaborate on the visa issue. But when asked whether there was a link to Haiti’s disputed presidential elections, he reiterated the U.S. position that Haiti needs to adopt the OAS suggestions.

“There are strong reasons to believe that the results that were announced do not reflect the will of the Haitian people,” Crowley said. “To the extent that there are individuals who are connected with episodes of violence or corruption, we will not hesitate to take appropriate action.”

The State Department’s announcement came a day after the Obama administration sharpened its urging that Haitian resolve the electoral impasse — or risk losing international support.

U.S. Ambassador Susan Rice said at the United Nations that Haiti needs to find a way to quickly seat a legitimately and democratically elected government.

1 thought on “Duvalier breaks silence as U.S. gets tough”